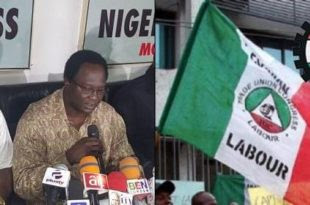 The Organised Labour has insisted on embarking on a nationwide strike
over the refusal of the states and federal government to agree on
N30,000 as the new National Minimum Wage, in spite of the National
Industrial Court ruling in Abuja.

Mr Ayuba Wabba, President of Nigeria Labour Congress, said this in an interview with NAN on Friday in Abuja.

The
National Industrial Court of Nigeria in Abuja has restrained the
organised labour from proceeding on a nationwide strike on Friday.

The strike by organised labour is scheduled to commence on Nov. 6 over the new National Minimum Wage for workers in the country.

According to Wabba, we are not aware of any court ruling and we have not been served any notice.

“We
have just concluded our joint organ meetings of the Central Working
Committees of the Labour Centres of the NLC, Trade Union Congress and
the United Labour Congress here in Lagos.

“The meeting is the
final preparation for a full engagement with the government on the new
National Minimum Wage and we have taken our decision to go on the
strike.

“Our decision is to go ahead with the nationwide strike unless the government does the needful,” he said.

“We are not aware because we have not been served any court order; we have taken our decision and we are going to stand by that,” he added.

Labour
had earlier called on its members to mobilise in preparation for the
commencement of an indefinite strike on Nov. 6, unless necessary steps
are taken to adopt the recommendation of the Tripartite Committee.

ATIKU: Why Selling Assets To Fund The Budget Is Irresponsible