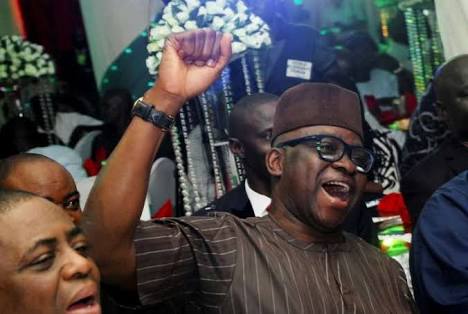 The Peoples Democratic Party’s five House of Representatives members
from Ekiti State have expressed their confidence in the leadership of
the Chief Gboyega Oguntuase-led State Working Committee (SWC) of the
party.

They dissociated themselves from Saturday’s meeting of
some stakeholders held at the instance of the Senate Minority Leader,
Mrs Biodun Olujimi, which called for the dissolution of the SWC.

The House of Representatives members are:

Stating their
loyalty to the immediate past governor of the state, Ayodele Fayose, the
legislators said there was no leadership vacuum in the PDP in Ekiti
State, advising those desperate for political leadership to wait for
their time.

The members called on the Senate leadership to
caution Olujimi against causing a crisis that could affect the party’s
chances at the 2019 general elections.

In a statement signed on
their behalf by Adekola, the caucus said they were not consulted before
the meeting took place, adding that most of those who attended worked
against the party in the July 14 governorship election.

“While
we agree that individuals or groups have rights to hold meetings, we are
miffed that Senator Olujimi is taking her selfish agenda of collapsing
the party structures to the extreme.

“We were not consulted
before the meeting was held and most of those who attended the meeting
were those who worked against our party in the July 14 governorship
election. Some of them were even governorship candidates of other
parties, and collectively, they could not get up to 1,000 votes in the
election.

“Also, leaders like Chief Bola Olu-Ojo, who attended
the meeting innocently have started dissociating themselves from its
outcome and by Saturday this week, a proper meeting of stakeholders will
be held in the state,” the statement read.

It added, “Most
importantly, is Senator Olujimi also claiming leadership of the PDP in
the South-West since they said she was the highest-ranking elected
official in Ekiti State and the South-West?

“We, therefore, call
on our party’s members and supporters to disregard the meeting and its
outcome, bearing in mind that it was a gathering of dissidents, most of
whom contested the July 14 governorship election under other parties
with some of them getting less than 200 votes.”