FFK Reacts To Ekiti Election: “Weep Not For Fayose”

by Tony Orji
in News
Reading Time: 7min read
0
Share on FacebookShare on TwitterShare on Whatsapp 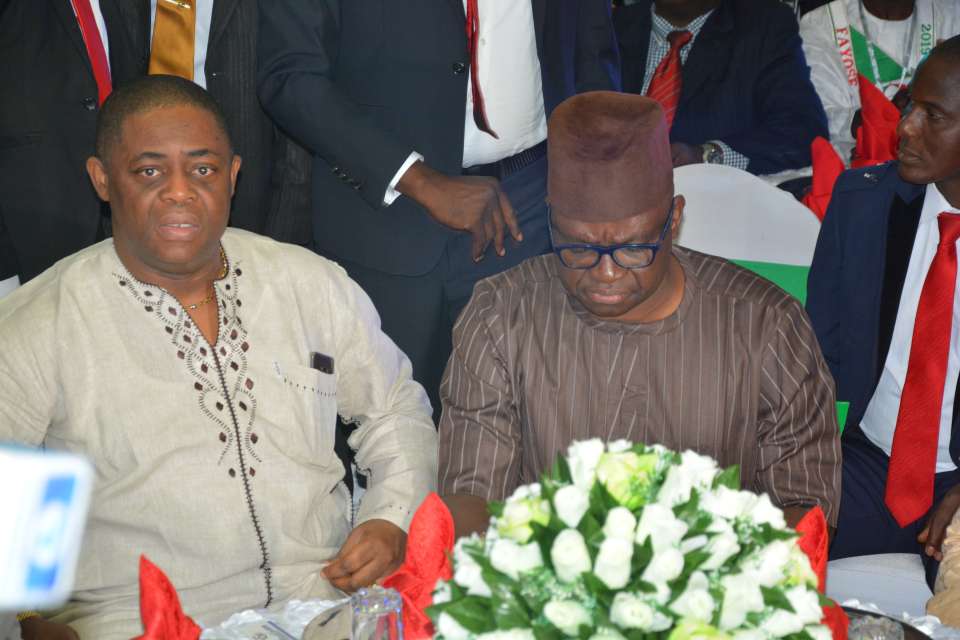 “When Fayose won in 2014, the whole of Ekiti erupted with joy. In 2018
the APC “won” and all the streets of Ekiti are looking so gloomy. The
people are sad because their will has been truncated”- Adeolu Daramola.

My friend and brother, Governor Peter Ayodele Fayose of Ekiti state,
is not infallible. He is not an angel and like every other mortal, he
has his own fair share of faults, excesses and shortcomings.

We do not agree on everything and neither do we always share the same opinion on matters of state and policy.

I
should add this: some of his friends are my sworn enemies and some of
my friends are his, yet nothing and no-one can come between us.

That
is the nature of our covenant and deep bond which has its roots well
above politics, which was borne through our shared love of the Living
God and the Gospel of Christ and which was established and forged by the
blood of Jesus.

Our differences in terms of style and approach
only brings us closer and serves to make our friendship stronger. And
despite his regular displays of strong emotions, what a profoundly good
and insightful man he is.

In terms of courage, compassion,
decency, the love of his people and a yearning for truth and justice he
stands head above shoulder virtually every other political leader in the
country.

And permit me to add this: even if I am the only one
left in the country that is willing to do so, I will stand by him till
the end.

That is the nature of the man that the Buhari
administration robbed, beat, slapped, humiliated and insulted last week
and that they are now planning to utterly destroy.

Yet despite
the abysmal behaviour and shameless criminality of INEC, the ruling-APC
and Buhari’s minions during the conduct of the governorship election
last saturday Fayose has nothing to be ashamed of and, in my view, he
remains the epitomy of courage, truth, loyalty, decency, compassion and
righteousness.

He stood for truth and he dared the powers that
be in the name of the Most High God. Regardless of what we see today and
what we witnessed on saturday, that God shall never forsake or leave
him and in the end he will have the last laugh and be vindicated.

The
bitter truth is that the Ekiti election was a sham. The APC paid 4000
naira for each vote that they got and, in collusion with INEC officials,
they used the police and security agencies to drive away PDP agents and
supporters from voting and collation centres. They also shut down the local television and radio stations to prevent the truth from being exposed.

I say
weep not for Fayose, Professor Kolapo Olusola (the PDP governorship
candidate), or the PDP but rather weep for the good people of Ekiti
state, Yorubaland and Nigeria.

Worst of all is the fact that the daylight robbery that took place on saturday is actually a test run for 2019.

Those
that are laughing at Fayose and making jest of his misfortunes and his
efforts to defend the true wishes and will of the Ekiti people will get
their own at that time (2019).

When
the jihadists, herdsmen and members of Nigeria’s “master race” start
terrorising and butchering the good people of Ekiti state, the
south-west and the south, just as they are already doing to the people
of the Middle Belt, no-one should be surprised and neither should they
complain because that is the nature of the beast that has broken the
gate and forced itself into their land and homes.

Those that
collected cash from the APC in return for their votes have unknowingly
sold their souls, sovereignty, destiny independence and birthright to
the agents and emissaries of satan in return for the rulership of a
vicious and relentless cabal of vampires, demons, goblins and monsters
who hail from a distant foreign land.

For a measly 4000 naira
they have traded in their liberty and freedom in return for the
dictates, whims and caprices of a wicked group of heartless and cruel
men who take their orders and directives from a dark, sinister and
blood-filled cauldron of sorcery and voodoo and a malevolent and
accursed tattered old broom.

I have not mentioned any names but the creatures that I am referring to know who they are.

The same goes for Otunba Niyi Adebayo, the former
Governor of Ekiti state and the leader of the APC in Ekiti, who is not
only a family friend of over 50 years standing but also a dear brother.

I
do not bear any animosity towards either of the two or towards Senator
Femi Ojudu, another friend of mine, who is also a strong APC leader in
Ekiti state either.

However I consider those that they represent
and who sent them to enslave the southewest and the people of the south
with cattle colonies, herdsmen, cows, a Janjaweed ethos and a jihadist
philosophy as my perpetual, mortal and eternal enemies before whom I can
and will never bow.

That is where I draw the line and that is
our only point of departure. Outside of that I have no malice for or axe
to grind with any of the leaders of the APC in Ekiti state or indeed
anywhere else in Yorubaland. We simply belong to different teams and and
different political camps. And this is for good reason.

For
those that doubt it let us consider our plight in Nigeria today.
Insecurity is at its peak. The mass murder, ethnic cleansing and
commission of genocide against innocent and defenceless Nigerians is
unprecedented.

Our nation is more divided than ever before. Our
economy is in shambles and poverty stalks the land. The senior cadre of
our Armed Forces are aggrieved because President Muhammadu Buhari has
refused to appoint new Service Chiefs since the tenure of the old ones
expired.

The democratic process has been subverted as votes are
procured with public funds and electons are rigged with the apparatus of
the state. People no longer see or believe that their PVC is their
weapon because few believe that we can ever have a free and fair
election in our country as long as Buhari remains in power. The list
goes on and on and it is one lamentation after another.

Rev. Martin Luther King jnr. once said “to ignore evil is to become an accomplice to it”.

How
right he was. And many in our nation today, out of fear, stupidity and
cowardice, have chosen to simply ignore the evil that took place in
Ekiti on saturday.

Yet even worse than them are those that have
chosen to applaud the evil and celebrate it simply to spite Fayose. They
forget that to applaud injustice is not only shortsighted and evil in
itself but that it is also a graphic and singular manifestation of
witchcraft and sorcery.

The truth is that those that delight in
the suffering, misfortune and humiliation of others and that refuse to
stand up and speak for the victims of injustice, wickedness and tyranny
are doomed to failure and eternal shame and are best described as the
children of darkness and the sons and daughters of perdition. They shall
all burn in hell.

Many in our country are troubled by the many
challenges that the Ekiti debacle has thrown up and even more understand
and discern its solemn implications.

As examples of some of
those concerns permit me to share the insighful words of two respected
public commentators and discerning intellectuals about the implications
of what happeed in Ekiti.

“Is
it not now clear? Who wants to know more? Who wants to be further
schooled? This PVC matter needs a sincere government to function
properly. We have in place a government that looks away as Nigerians are
slaughtered. We have a government who moved in 30,000 officers to rig
an election and has a Division sitting on its thumbs in a place less
than an hour away where Nigerians are slaughtered in a killing orgy for
days. We have a government who encouraged a police officer to slap and
rough handle a Governor. We have a government that has appointed the
entire security architecture from a section of the country. And yes, we
have a country where conscience is for sale for 4000 naira and many say
it is overpriced. We must therefore retool. We must redirect and reset.
We must match the bar to where things has been raised. We cannot afford
to assume anything. As at now, count 2019 lost. Unless we retool. It is
not about PVCs and registration. It is about so much more”.

On his part Elder Michael Orobator wrote:
“We
have Judases and pernicious traitors, Fulani slaves and useless idiots
always at the beck and call of the internal colonisers in our ranks. I
have said it before and FFK strongly reiterated same that the Fulani,
most comfortable in situations of strife and warfare, will not leave us
alone until we weed out the Fayemis, Oshiomoles, Oyeguns, Amaechis et al
from our midst”.

Can any reasonable person dispute the insightful assertions of these two elderly, wise, experienced and discerning men?

Permit
me to conclude this contribution with the words of Peter “the Rock”
himself. After the rape of democracy that took place in Ekiti state on
July 12th he said:

“I am Peter Ayodele Fayose, I hold my head
high. I can never be suppressed. I don’t lose battles and I will not
lose this. I will laugh last.The President should note what the Bible
says which applies to him. ‘He that wears the armour should not boast as
he that removes it.’ It is only Buhari that will pride himself with the
security shooting sporadically at polling centres, scaring people to
pave the way for APC thugs to snatch ballot boxes”.

These are strong and prophetic words from a Spirit-filled soldier of Christ and a courageous and strong lion of the realm.

He concluded by saying “Buhari’s EFCC is threatening me, as if Buhari will remain in power forever. Is the EFCC the Court?”

How right he is!

May
God deliver our nation and may He guide, lead, strengthen and vindicate
Governor Peter Ayodele Fayose and the good people of Ekiti state.

Tears Of Joy! Nigerian Couple Buys A Car For Their Daughter’s Teacher (Photos)

“How Ministers Knelt Before Abacha In Fear” – Donald Duke