“How Ministers Knelt Before Abacha In Fear” – Donald Duke

by Tony Orji
in News
Reading Time: 8min read
0
Share on FacebookShare on TwitterShare on Whatsapp 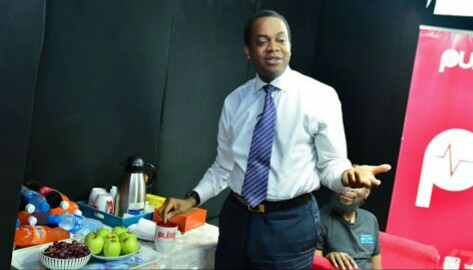 Former Governor of Cross River State, Donald Duke, has shared stories of
power and trepidation during the dark days of the military era. He was
an insider…

General Sani Abacha was Nigeria’s military ruler
from 1993 to 1998 and Duke was a member of Abacha’s National Economic
Intelligence Committee (NEIC) which was chaired by renowned economist,
Prof Sam Aluko.

The NEIC was charged
with monitoring capital projects of the federal government and
proffering solutions to the nation’s economic problems.

In an
exclusive interview with Pulse Nigeria, Duke described how ministers
quaked in their boots before Abacha inside the presidential villa.

A rogue petroleum subsidy regime
According to Duke, the criminal subsidy Nigeria currently pays on petrol, began during Abacha’s reign.

“It
was during this time that we really let our refineries go under and we
just went into unbridled importation of petroleum products”.

“Of course there was a lot of backlash because the
NNPC (Nigerian National Petroleum Corporation) boys wanted to manage the
refineries themselves. I think Abacha just said, you know what, let’s
just import this thing.

“It was during Abacha’s time that the
real subsidy started. Look, the subsidy is a racket. Right now, they are
paying over a trillion Naira. It’s not…that thing can’t be more than
400, 500 billion Naira.

But you can’t subsidize what you are importing. Like I said, you can fix those refineries.

Get
the manufacturers to refurbish them as new. But the critical thing is
who is going to manage them? If you give it to the same people, they
will run it down!

“Right now, NNPC really has no business managing those things”.

The day Abacha died
Duke
recalls exactly where he was when Abacha died on June 8, 1998. “I was
in a friend’s house and we were talking”, he says with a knowing smile.
“His name is Imam and he is from Kano and he was very close to Abacha.

A
phone call came in and I heard him shout: ‘Allahu Akbar!’ You know. And
I said, what’s wrong? He was shaking. And he said ‘Head of State die.

E don yamutu. I said which Head of State? He said ‘Abacha’. I said how? It was about 11am that morning”.

An era of trembling and sycophancy
Duke recalls a meeting with Abacha inside the Council Chambers of the Villa and how a contract inflation plot went awry.

“General Adisa was minister of works and he sent a memo to Abacha. He wanted to import bitumen for road construction.

Every memo that went to Abacha came to us for our opinion because he trusted Prof Aluko and the team.

Abacha didn’t trust anybody. Believe it or not, he abhorred corruption. Honestly!

“If
you tell Abacha that this man is a thief and you can prove it…oh he
will destroy the man! So he sends this memo to us. All the memos come to
us and we write our opinions.

This memo comes and Aluko looks at
me and says ‘Donald, two of you, go to Kaduna–Kaduna produces
bitumen–and find out why we can’t get bitumen in Kaduna. Why do we have
to import?

“So, I go to Kaduna and I find out that Kaduna has shut down because the bitumen tanks have not been evacuated.

Because bitumen is a by-product of Kaduna now. Kaduna doesn’t use Nigerian crude.

Kaduna
uses Venezuelan crude — heavy crude. And one of the by-products of
heavy crude is bitumen even though we have the second largest naturally
occurring deposits of bitumen in the world after Canada!

“If you
go to some parts of Ondo, bitumen is at the surface level. You can scoop
it and throw it up like this. We should be refining that thing.

That’s
another story. So, I go back to write my report to say the quality of
bitumen we wanted to import was inferior to what we have in Kaduna.

And if you don’t evacuate the tanks in Kaduna, the refineries couldn’t work!

“So, we wrote our memo and it was a very strong memo. For about a week or two, no response.

So one day, we were summoned to the Villa and we were told it was over our bitumen report.

“I
need to be graphic here”, Duke recalls with a chuckle. “There’s Abacha
sitting in the middle, to his right was Oladipo Diya, Chief of General
Staff.

To his left was Abdulsalam Abubakar who was Chief of
Defense Staff. To Abdulsalam’s left was General Buhari who was Chairman,
Petroleum Trust Fund (PTF). He’s a bitumen user.

“To his left
was Dan Etete who was Minister of Petroleum. To Etete’s left was Alhaji
Bayero who was GMD NNPC. To the right of Diya was General Adisa.

To
the right of Adisa was a series of executives of NNPC (Managing
Director of the Kaduna refinery and all of that). Across the room were
those of us from the National Economic Committee”.

Major General Abdulkareem Adisa was Minister of Works and Housing under Abacha.

He was convicted for involvement in an attempted coup against Abacha in 1997 and was placed on death row.

Adisa was granted presidential pardon alongside other alleged coup plotters, after Abacha’s death.

Duke
continues: “In the course of the meetings, Adisa was throwing tantrums
that if he isn’t allowed to import bitumen, he won’t do anything.

Buhari didn’t say a word throughout that meeting. At a stage, you could see that there was a deal going on.

“Adisa
would throw tantrums and say, ‘Oga, this people, na grammar dem dey
talk o! If dem no allow me import this thing, I no go do any work o! And
Abacha would say ‘Adisa, cool down’. So, you know, you could see that
there was an understanding.

“There was a huge amount of bitumen
they wanted to import. So, he takes a piece of paper and says Dan
(Etete), you say the price of bitumen is XYZ but what I’m seeing here is
different or am I wrong? Abdulsalam looks at him and says, ‘how can you
be wrong? You can’t be wrong Sir! Even if you are wrong, you are
right!’

“He looks at Diya and says ‘Dipo!’ That’s all he says.
‘Dipo!’ and Diya looks at him and says ‘you are right Sir!’ So he now
looks at Etete and says, Dan, what are you telling me? Literally, Etete
goes on his knees and says I’m sorry Sir!’”.

Diya who was
Abacha’s second in command, famously knelt to beg Abacha after he was
accused of involvement in a plot to overthrow the dark goggled Head of
State.

Etete has been accused of fleecing Nigeria in cahoots with
some members of the Goodluck Jonathan administration through the Malabu
oil scam.

Abdulsalam Abubakar became Head of State after
Abacha’s death. He oversaw Nigeria’s affairs for a year (June 9, 1998 to
May 29, 1999) before handing over to a democratically elected Chief
Olusegun Obasanjo.

Duke says Abdulsalam was reminded of his sycophantic chant after that meeting with Abacha.

Praising Abacha to high heavens
“Now,
when Abdulsalam becomes Head of State, the first meeting we
had….because he needed a briefing, and we were the only organization
that could give a comprehensive briefing.

The first question
Aluko asked him was ‘General, even if you are wrong you are right, abi?’
And he said ‘No, no, no, it’s a different dispensation”, Duke said to
general laughter. .

“Abdulsalam was very different. He was very liberal.

But
working with him was very delightful even though it was a very short
period and I also left to go contest and all that. But he was very
liberal.

He listened to you, you know. Abacha wears these sunglasses, you can’t see his eyes! And he was very impatient”.

Duke shared another instance of sycophancy during the Abacha era.

“I
remember once at a council meeting, he turned to Gambo who was Minister
of Agriculture and said ‘Agric, what’s the cost of fertilizer subsidy?’
Gambo didn’t know.

So, next thing was Anthony Ani who was minister of Finance.

So Tony Ani looked at him. Tony Ani was just being mischievous. And he said N20billion.

He just called a figure. So Gambo said N20billion. So Abacha said ‘enh?’

“So Abacha said ‘what are you calling?’

“He was just being mischievous, playing with the guy.

“There was trepidation in dealing with Abacha.

He
can go three months, he won’t have any council meetings. And there was
always this threat of reorganizing the cabinet. So when he says there’s a
council meeting, some ministers think it’s the final one for them”.

With
rumours swirling about an imminent shuffling of the federal cabinet
during Abacha’s reign, Duke said one minister decided to take executive
sycophancy to whole new heights.

“There was this time that rumour was really rife that he was going to change his cabinet.

So, we got in and they will come to our office to ask Prof Aluko if he’s heard anything.

“We
get into council at that time and the Minister of Planning Ayo
Ogunlade….You know in council, you put on your mic and you speak. So he
now puts on his hand and got up to speak. Abacha said ‘sit down’.

“First of all, you don’t say ‘No’ to Abacha. So the guy insisted on standing up and Abacha says, ‘Ok, stand’.

“So, the man now turns around and says, ‘Secretariat, I want you to record everything I am saying here’.

Everyone was like ‘anh..anh. They do that normally. So why are you emphasizing it?

“This man went on to praise Abacha to high heavens.

He
said ‘Nigerians don’t know what they have. He said, ‘God sent you at
this time to save our country’. I mean it was so bad, Abacha told him,
‘sit down’.

“Abacha said ‘sit down, you sycophant!’

“And he went on to praise Abacha to the high heavens. When he was done, he sat down. Abacha said ‘are you tired now?’

“So the meeting went on.

“After the meeting, Prof Aluko called him and said ‘Aburo (brother), what was all that about?’

“He said, ‘Ah…Oga, I hear they want to change cabinet o’.

“The interesting thing is, two weeks later, they changed cabinet and the man survived!

“But
you see, when Abacha wanted something done, it was done. But again, he
wasn’t prepared for leadership like most of our leaders and he was very
myopic.

Ministers didn’t have access to him and all that”, Duke narrated.

Running for president
56-year-old Donald Duke has declared his intention to vie for the position of Nigeria’s president in the 2019 general elections.

Abacha
seized power from the interim government of Ernest Shonekan after the
unrest caused by the annulment of the June 12, 1993 presidential
election won by Chief MKO Abiola.

FFK Reacts To Ekiti Election: “Weep Not For Fayose”

Mistakes To Avoid When Travelling Abroad