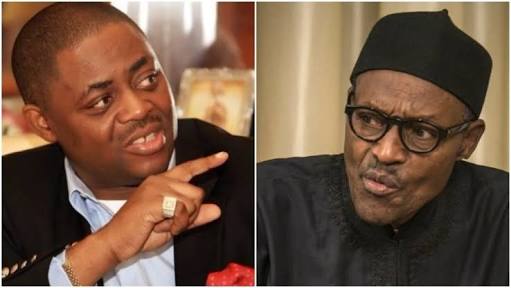 Femi Fani-Kayode believes former President Olusegun Obasanjo made a
mistake by supporting Muhammadu Buhari to become president. Here’s a
brief excerpts from what he told Punch concerning both leaders:

You have been a strong critic of President Buhari but always defending ex-President Obasanjo. Why is this so?
President
Olusegun Obasanjo is an elder statesman, a great nationalist, a
historic figure, one of the most respected leaders on the world stage
and a man that I love, respect and admire. I make no apology for that.
He is an exemplary leader and I consider him to be the most effective
and transformational President that Nigeria has ever had.

I say this because his record in public office is second to none and
what he managed to achieve as President between 1999 and 2007 was not
only outstanding but also borders on the miraculous.

It was an
honour for me to serve in his government and he taught me much of what I
know about governance, politics and public service. He is loyal to his
own (people), strong, courageous, focused and inspiring and he is a man
of deep religious convictions and faith. He is a devout Christian who
fears no man, and honours, reveres and loves God. That is who and what
Obasanjo is.

Having said all that, I must add that I do not
always agree with him. For example, he opposes the idea of
restructuring and seems to have reservations about the right of
self-determination for the various ethnic groups that make up our
country whilst I am a passionate believer and supporter of both.

I
also disagreed with his choice of President Buhari in 2015. I supported
President Goodluck Jonathan who was, in my view, a far better man
whilst he supported Buhari. I believe that was a grave error on his part
and I think that my position has since been vindicated. This is because
Buhari has proved to be selective, vindictive, divisive, incompetent
and wholly unfit to lead a multi-ethnic, multi-religious, multi-cultural
and plural secular nation like Nigeria. I say this because Buhari’s
only purpose was to exact vengeance on his perceived enemies, divide the
nation, effect an evil and ancient hegemonistic agenda, subjugate our
people, Islamise our nation, persecute southerners and people from the
Middle Belt, humiliate Christians, diminish and degrade the Church, ruin
our economy, destroy our country and push us to the brink of armed
conflict and civil war. Since he came to power, the country has gone on a
downward spiral. Nigeria needs to be rescued and saved.

Recently
when President Buhari said a former President (alluding to Obasanjo),
spent $16bn on power and that still, there was no power, you also came
to Obasanjo’s defence. What do you know about the power project that the
President or Nigerians don’t know?
Obasanjo never spent $16bn
on the power sector. The $16bn figure was a fictitious one and it was
maliciously fabricated by one Tanimu Yakubu, who was the late President
Umaru Yar’Adua’s aide.

Yakubu, together with his boss, Yar’Adua, were hell bent on discrediting Obasanjo and tarnishing his record in public office. Another
Yar’Adua’s aide by the name of Engineer (Foluseke) Shomolu, who was his
adviser on Power Reform, attempted to counter Yakubu by writing a memo
to Yar’Adua, warning him that Yakubu was telling lies and he sent the
relevant supporting documents to prove it.

Sadly, Yar’Adua
did not only ignore him, he also fired him for speaking the truth. They
probed Obasanjo on the power issue and it failed. The then Speaker
of the House of Representatives, Dimeji Bankole, who was very close to
Yar’Adua, set up a House of Representatives’ Committee, which was
chaired by my friend, Ndudi Elumelu. But after Liyel Imoke, who was
Obasanjo’s Minister of Power, appeared before them and proved that
nothing untoward was done and that only $3.4bn was spent on power and
not $16bn as Yar’Adua had claimed, the whole thing fell apart and they
could proceed no further.

Imoke also explained to the committee
that Obasanjo increased the generation of power from 1, 000 megawatts
per day in 1999 when he came in to 4, 500 megawatts per day in 2007 when
he left office. He provided evidence of the numerous integrated power
projects that Obasanjo had established and how Yar’Adua was attempting
to destroy and frustrate them.

Finally, he exposed the fact
that part of the $3.4bn was spent on buying 18 massive gas turbines
which had arrived at our ports two days after Yar’Adua was sworn in as
President and which he refused to clear and left at the ports to rot.
This was all in an attempt to spite Obasanjo and ‘prove’ to the world
that he had done nothing in the power sector.

The $16bn allegation was probed by the
Jonathan-led administration as well. He set up a commission of inquiry,
which was chaired by Governor Gabriel Suswam of Benue State and
comprised of one governor per zone across party lines from the six zones
of the country and officials of the Central Bank of Nigeria, the
Ministry of Finance and other relevant stakeholders and agencies.

It
is a testimony to Buhari’s pettiness, deceit, ignorance, malevolence
and deficit of good sense that he should still be alleging that Obasanjo
spent $16bn on power and has the sheer impudence to ask ‘where is the
power?’ The only reason he is now saying this and asking such questions
is because Obasanjo is opposed to his second term bid.

Foods That Are Richer In Protein