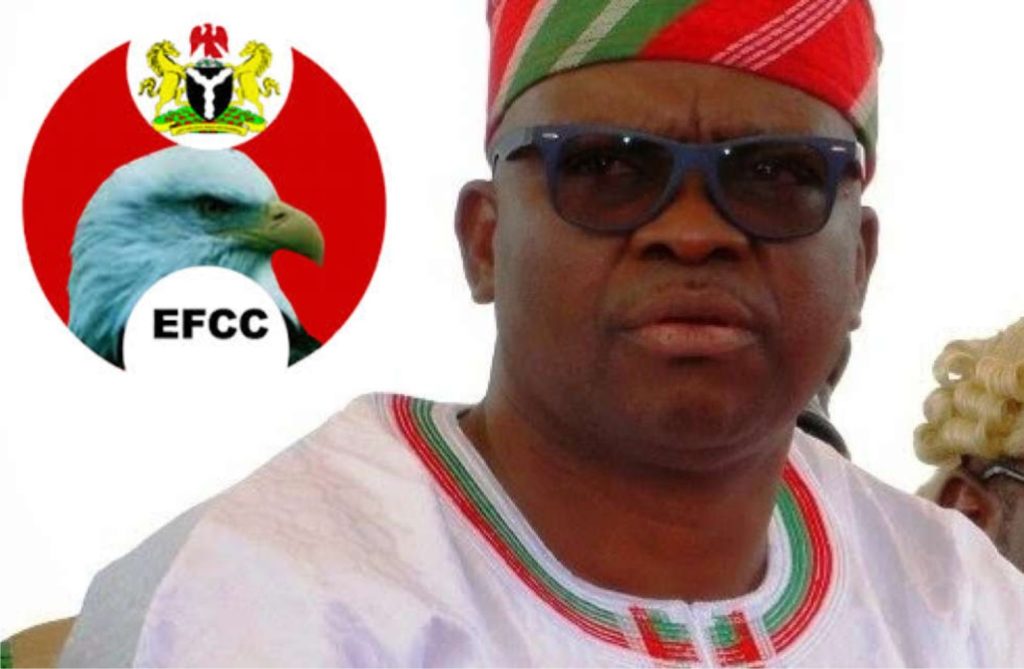 The Economic and Financial Crimes Commission has approached the Federal
High Court in Abuja for a fresh order of interim forfeiture of six Lagos
and Abuja properties linked to Governor Ayo Fayose.

Despite
that EFCC’s fresh application was filed “ex parte”, a sort of
one-sided preliminary proceeding, and the commission’s claim that the
properties had been unclaimed, Fayose had, through the law firm of Mike
Ozekhome (SAN), filed a preliminary objection to challenge the
forfeiture hearing.

Justice Nnamdi Dimgba, before whom the fresh
application was filed last month, had, on July 20, 2016, granted the
EFCC an order of interim forfeiture of the properties for only 45 days.

The
commission also subsequently, on November 3, 2016, obtained a similar
order from Justice Okon Abang, who was then permanently sitting in the
Abuja Division of the Federal High Court.

With the later
redeployment of Justice Abang to Delta State, the EFCC, through its
counsel, Mr. Offem Uket, last month, filed the ex parte application,
asking Justice Dimgba to “vacate” the earlier order made by Justice
Abang and impose a fresh order of interim forfeiture of the properties.

The
commission claimed that “the properties are under the possession and
control of the EFCC and have remained unclaimed, as no person, including
the suspects, has indicated interest in them, after the said properties
were marked with the words, ‘UNDER EFCC INVESTIGATION’.”

Four of the properties in question, numbered as Chalets 3, 4, 6 and 9, are each four-bedroomed.

The four chalets are said to be located at Plot 100 Tiamiyu Salvage, Victoria Island, Lagos.

The two other properties are located at 44 Osun Crescent and Plot 1504 Yerdseram Street, both in Maitama, Abuja.

The
commission stated as part of the grounds for its fresh application that
the properties were acquired with proceeds of unlawful activities,
involving funds fraudulently transferred from the Office of the National
Security Adviser.

It said in the application that the properties
were subjects of pending criminal trial involving the funds allegedly
transferred from ONSA’s account.

The property at Plot 1504
Yerdseram Street, in Maitama, Abuja, was said to have been acquired in
the name of Spotless Investment Limited, a company whose bank account is
said to be run by Fayose and his wife.

An
associate of the Ekiti State governor, Abiodun Agbele, and Spotless
Investment Limited are being prosecuted alongside two other companies on
charges involving the sum of N1,219,000,000 said to be part of a total
N4,685,723,000,000, allegedly taken fraudulently from ONSA’s account
with the Central Bank of Nigeria in 2014.

The two other companies
along with whom Agbele and Spotless Investments Limited are being
prosecuted are Sylvan Mcnamara Limited, linked to a former Minister of
State for Defence, Musiliu Obanikoro, and his sons and De Privateer
Limited run by Agbele.

It was alleged that the funds were released in June 2014 to fund Fayose’s governorship election.

While
insisting that the properties, which their forfeiture to the Federal
Government was being sought were subjects of the ongoing criminal trial,
the EFCC explained that the funds from ONSA’s account was fraudulently
transferred to Sylvan Mcnamara Limited (Obanikoro’s company).

It
said, “The properties sought to be forfeited are reasonably suspected to
have been acquired with proceeds of unlawful activities derived from
funds fraudulently transferred from the Office of the National Security
Adviser to the account of Sylvan Mcnamara Ltd.

“The funds
transferred to Sylvan Mcnamara Limited were later trailed to the
personal accounts and companies associated to Messrs Ayodele Fayose and
Abiodun Agbele.

“That there is the need to grant the interim
forfeiture order to enable the properties/funds listed in the schedule
above to be forfeited to the Federal Government.

“That part of
the funds fraudulently transferred from the Office of the National
Security Adviser was found to have been used by Spotless Investment Ltd
to liquidate a loan facility it had earlier obtained from the bank.”

According
to Punch, last month, a lawyer from Ozekhome’s law firm, Godwin
Iyinbor, appeared in the case for Fayose “in protest” against the
proceedings.

He noted that he had filed a preliminary objection challenging the jurisdiction of the court to hear the EFCC’s motion ex parte.

Uket,
who acknowledged that he had been served Iyinbor’s preliminary
objection, objected the protesting lawyer being heard since the motion
being considered was ex parte.

But Justice Dimgba said he would hear Iyinbor since the issues raised had to do with the court’s jurisdiction.

He adjourned till September 27 to hear all pending motions altogether

Healthy Foods For Your Appetite

MUST READ!!! IMPORTANT INFORMATION FOR UNN FRESHMEN REGISTRATION FOR THE 2020/2021 SESSION