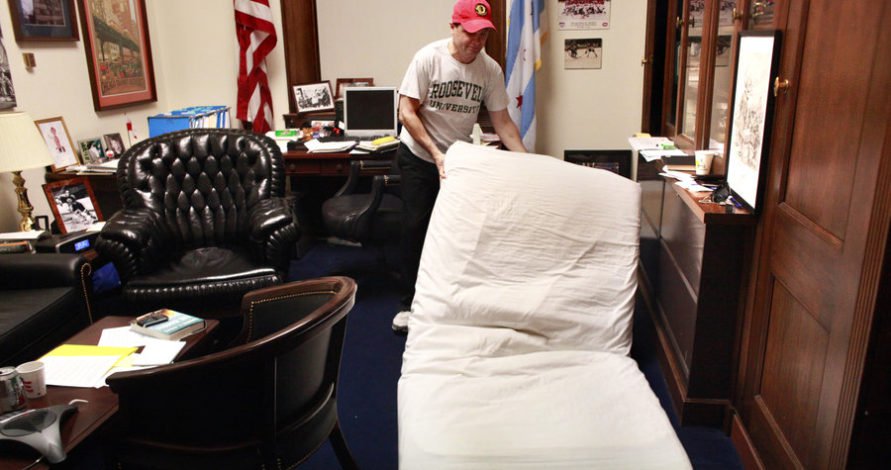 An increasing number of US Congress members have turned into
professional squatters at night, sleeping in their Capitol Hill offices
to save some money during the work week.

And they are blaming decade-long stagnant salaries and Washington’s steep cost of living for their ordeal.

“Washington is too expensive,”

said Rep. Dan Donovan (Republican-Staten Island), who credits the cot
that he sleeps on in a tiny alcove in his office as the reason he is
able to serve in Congress while still paying his New York City housing
costs.

“If we go to the point where you have to rent or have to
buy [in DC], then only millionaires would be members of Congress,” he
said. “I don’t think that was the intent of our Founding Fathers.”

Many
of them previously got extra compensation, or a per diem, when they
served in their home-state legislatures to cover their living expenses
while at the state capitol.

But as members of the House, U.S.
reps receive a salary of $174,000 a year a figure that hasn’t increased
in nearly a decade and no housing allowance, while working in a city
where a sparse one-bedroom pad can start at $2,000 a month. Meanwhile,
they also have to pay to maintain a residence in their home state.

Members
of the Senate seem to fare better, if only because they rake in nearly
$20,000 more a year, or $193,400. There are few if any known examples of
senators bunking down in their offices overnight.

Senseless Killings: There may be no Nigeria or Elections in 2019 – Pastor Adeboye