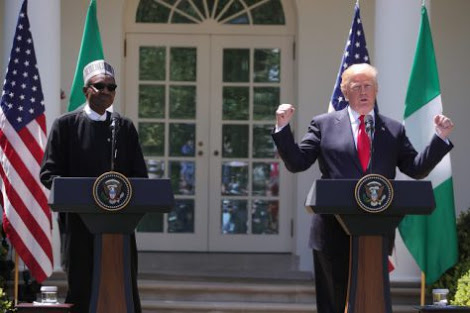 The United States President, Donald Trump, on Monday described the
killing of Christians in Nigeria as a serious problem, saying the US
would not accept it.

Trump also condemned the burning of churches and urged the Buhari government to ensure security in the affected areas.

He said the government of the US and that of Nigeria would work hard to resolve the problem.

Trump
said this shortly before he entered into a closed-door meeting with
President Muhammadu Buhari at the Oval Office in the White House,
Washington DC.

“We have met before, we have a great relationship.
I look forward to our discussion today again, especially as it relates
to terrorism. Terrorism all over the world is a hotbed and we are going
to be stopping it.

“We have had very serious problems with
Christians who are being murdered in Nigeria; We are going to be working
on that problem very, very hard because we cannot allow that to
happen,” he said.

Trump who said his government had decimated the ISIS over the last 12 months, said Boko Haram had been terrible.

He asked Buhari how he was handling the issue of the abducted Chibok and Dapchi girls.

Buhari said his administration had not given up on the remaining Dapchi girl and the Chibok girls.

“The
Chibok girls kidnap was before we came; we rescued some of them. The
Dapchi girls were 106, we rescued 100, four died, and one is still in
captivity. We are very grateful to the United Nations Organisation that
is acting as a go-between and is helping out. We have not given up on
the last Dapchi girl,” he said.

The President insisted that Libya crisis and Muammar Ghaddafi were responsible for herdsmen killings.

He
said, “The problem of cattle herders is a very long historical problem.
Before now, Nigerian herders were known to carry sticks and machetes
and cut follies for their animals, but these ones are carrying AK-47.”

Nigeria, US to repatriate $500m looted fund –Buhari
Later,
at a joint press conference with Trump after a meeting of the two
leaders at the White House, Buhari said the US and Nigeria were
collaborating to repatriate over $500m stolen from Nigeria.

He said the funds were stashed away in banks across the world.

He
said, “Our two governments have put the machinery in place for our
respective Attorneys-General to collaborate in ensuring the return to
Nigeria of over $500m looted funds stashed away in banks around the
world.

“In this connection, we congratulate the US government on
launching a Kleptocracy Asset Recovery Initiative which was spearheaded
by the US Department of Justice Asset Forfeiture and Money Laundering.

“We hope that we could continue to count on the US support in this area.”