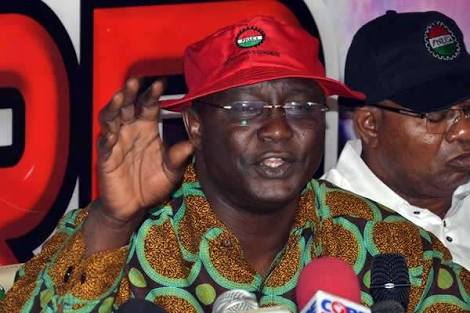 Nigerian workers’ umbrella union, Nigerian Labour Congress (NLC) has
said it will not to allow the Tripartite Committee for National Minimum
Wage to alter the time line for the implementation for the new wage.

Their
position was made known by NLC President Ayuba Wabba at a Pre-May Day
Symposium organised by the NLC and the Trade Union Congress (TUC) in
Abuja.

The theme of this year’s May Day celebration billed for
today across the globe is: “Role of labour and workers in national
devolvement: Dare to struggle and we dare to win.”

The Federal
Government, which raised a wage review panel in November last year,
promised to implement the new national minimum wage for workers from the
third quarter of the year, based on the recommendation of the committee
chaired by a former Head of Civil Service of the Federation Ms. Ama
Pepple.

Wabba said: “We will make sure that the time line that
has been set by the tripartite committee for the implementation of the
national minimum wage will not in any way be altered or undermined.

“Workers,
who create wealth, must also be well taken care of as we are not
unmindful of the situation of the Nigerian workers, particularly, with
the increasing inflation in the land.

“So, clearly speaking, the
minimum wage is an issue we will continue to canvass for. I want to
assure you all that we will take the issue to the next level and
essentially we are going to win.”

Speaking on today’s
celebration, the NLC president described May Day as an opportunity to
provide workers better policy and address issues affecting them.

Wabba said workers must be prepared to demand for a better working condition and welfare.

He
said: “Importantly, we are going to interrogate how far the democratic
process has been able to deliver on its mandate and how workers have
being fairing.

“Workers have contributed immensely to our
national development and workers create the wealth of every economy,
however, they are neglected.”

The Nation reports that he urged
the government to address the issue of governance, inequality gap,
unemployment and development among others.

Prof. Onje Gwardo,
Faculty of Law, University of Jos, called for commitment among workers
in the discharge of their duties. He urged them to show commitment to
work, ideas and national development.

“We have some level of commitments that have been exemplified by those who have gone before us,”

In
his goodwill message to the workers, Senate President Bukola Saraki
yesterday hailed the resilience, dedication and contributions of workers
to national growth.

Telecommunications solution provider,
Globacom, also identified with the workers and commended them for their
uncommon industry, abiding resilience and unimpeachable patriotism.

In a statement by his media aide Yusuph Olaniyonu in Abuja, Saraki described workers as the mainstay of the economy.

The
statement reads: “They (workers) form the bedrock on which the building
blocks of any sustained national development can be laid.”

He
called on the workers to continue to put in their best in any sector
they find themselves, saying that their efforts shall never be in vain.