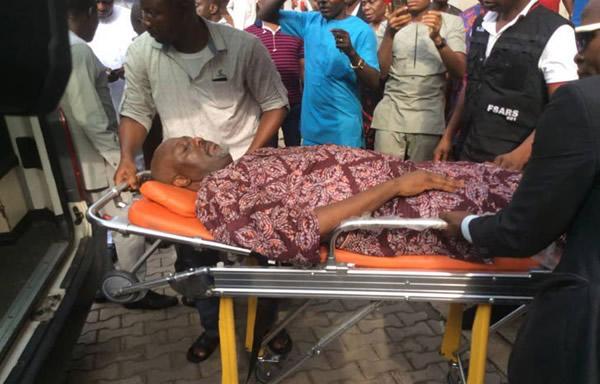 Falana
said in a statement on Thursday that the degrading and humiliating
treatment meted out to Melaye was a violation of his fundamental human
right.

“The arraignment of Senator Dino Melaye on a stretcher in Abuja on
Wednesday and Lokoja on Thursday morning is unacceptable in a civilised
society.

“It is particularly degrading and humiliating as it
violates the fundamental right to the dignity of his person guaranteed
by Section 34 of the constitution and Section 7 of the Administration of
Criminal Justice Act, 2015.”

Falana, however, stated that
Melaye’s ordeal was a reflection of the suffering ordinary Nigerians
faced in the hands of security agents on a daily basis.

He,
therefore, called on the National Assembly which had protested against
Melaye’s arrest, to use the opportunity to call on the relevant agencies
to turn a new leaf.

The activist said the National Assembly
should give equal attention to the leader of the Islamic Movement of
Nigeria, Sheikh Ibrahim El-Zakzaky, and a former National Security
Adviser, Col. Sambo Dasuki (retd.), who have both remained in custody
for nearly three years despite several courts granting them bail.

Falana
added, “Even though the senator has my sympathy, it is
indistinguishable that he has only been given a little dose of the
humiliating treatment that is daily meted out to the flotsam and jetsam
of our unjust society by the Nigeria Police Force and other law
enforcement agencies in Nigeria.

“Therefore, the senator’s case
should not be treated in isolation by the Senate and the bourgeois
media. While the solidarity of the federal legislators with Senator
Melaye is understandable, the tragic turn of events calls for sober
reflection.”

Meanwhile, the House of Representatives on Thursday
issued stern warnings to security agencies, particularly the police,
over Melaye’s life.

Melaye, who represents Kogi-West Senatorial
District, was said to have been driven in a police ambulance from Abuja
to Lokoja on Thursday.

He was taken on a stretcher into the
Federal High Court in the town, where he was arraigned over gunrunning
allegations by the police.

The senator was later reminded in custody till June 11