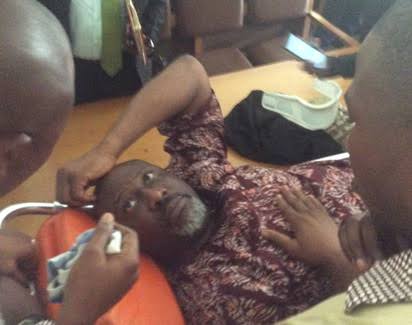 The Speaker of the House of Representatives, Yakubu Dogara has warned
the heads of security agencies involved in the case of Senator Dino
Melaye, saying that nothing untoward must happen to the lawmaker.

He said if anything happened to the senator, heads of security agencies involved would be held responsible.

The
Speaker, who was short of naming the security agency he was referring
to on Thursrday at plenary said the health of persons should supercede
their arraignment in court.

He said: “All I can say is that
nothing can happen to the senator. If anyone in this country commits an
offence, the law is there for the person to be prosecuted or arraigned
in court within the ambit of the law.

“I don’t think the law
supports a situation whereby someone is in a dire health situation and
is being arraigned most especially that that person is a senator.

“It is unthinkable that a distinguished senator or an honorable member of this house would run away from trial.

“So,
my admonition to the security agencies is to do everything possible to
ensure that his life is secured first before prosecution.

“Prosecution
cannot come at the expense of death and that is very important because
if anything happened to him, the responsibility will lie on the security
agencies.

“That is without mincing of words; because I have not
seen a country where someone will be arraigned in a stretcher; where he
is not even in the right frame of mind to even take a plea.

“What
use is it if you’re taken someone to court and he cannot plead guilty
or not guilty. So, the emphasis should be on his health first”.

Dogara’s
warning followed a point of order by Sunday Karimi ( PDP, Kogi), who
said Melaye was being transported in an ambulance to Lokoja to face
trail despite the state of his health.

Karimi said Melaye’s predicament was as a result of his resolve to fight for his belief.

“I visited him in the hospital and counted up to 38 policemen. On Saturday, INEC went to conduct his recall.

“Only yesterday, he was arraigned in court in Abuja. Today, Dino was carried in an ambulance to Lokoja.

“What
is happening to Dino can happen to anyone, what he is facing is
persecution for his belief and there’s a need for us to act so that rule
of law doesn’t suffer”.