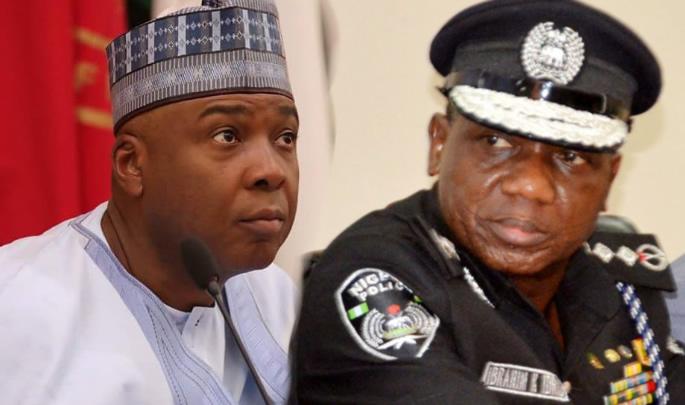 Popular human rights lawyer, Femi Falana (SAN); another Senior Advocate
of Nigeria, Mike Ozekhome; and legal practitioner, Dr. Konyinsola Ajayi,
have disagreed on an order by the Inspector General of Police, Ibrahim
Idris, for the transfer of suspects arrested in Kwara State over
allegations of murder and criminal conspiracy.

The lawyers made their positions known in separate telephone interviews with Punch yesterday.

The
police spokesperson, Jimoh Moshood, had said the suspects were
transferred to Abuja for further investigation in the allegations
levelled against them.

The Senate President, Dr. Bukola Saraki,
who is from Kwara State, had claimed on Wednesday during a senate
plenary that the suspects’ transfer was part of a grand plot by the
Inspector General of Police to frame him.

On whether the IGP’s
order for the suspects’ transfer to Abuja was lawful, Falana said it was
not unusual for the investigation of criminal cases to be transferred
from any of the states of the federation to Abuja, adding that the
action would not stop the prosecution of such cases in the states where
offences were committed.

According to the SAN, the investigation
of cases can be transferred to Abuja “if, for instance, the Inspector
General of Police receives a petition that there is manipulation of such
cases at the local or zonal level.”

He said, “In this particular
instance, since the police claim that these criminal suspects have made
confessional statements, the investigation should be speedily concluded
so that all those who are indicted are charged to court.

“Under
the law, you cannot charge them to court in Abuja, they have to be
charged to court where the offence was committed but on a regular basis
in Nigeria, every state police command is regularly directed to send
case files to Abuja based usually on petitions, either by the
complainant or the accused person that manipulation is suspected locally
or at the zonal level.

“I have handled cases in Kwara where my
clients were referred to Abuja as suspects and that is my experience in
all states of the country. But at the end of the every investigation,
the case file is sent to the Attorney General of the Federation, who
will advise the police to charge to court. If it is a state offence, the
suspect will be charged in the state High Court and if it is a federal
offence, the suspect will be charged in the appropriate Federal High
Court.”

However, Ozekhome said the investigation and prosecution
of the case should be done in Kwara State, adding that what he saw
playing out in the matter was “very dirty politics.”

He said,
“The suspects were arrested in Kwara State for an offence allegedly
committed in Kwara and they made their statements in Kwara and the
statements made had been taken by the police and the court registry,
which said it had proffered first information referral to the Director
of Public Prosecutions for necessary legal advice.

“It is within
the purview of the DPP of the state to give the legal advice as to
whether or not there is a prima facie case established against the
alleged cult members, such as to warrant them to be put in the dock for
trial. This is a state offence and under the constitution, there are 36
states in Nigeria with a Federal Capital Territory.”

Ozekhome
said the story would be more plausible that the suspects were “merely”
being taken from Ilorin to Abuja for the purpose of possibly torturing
them to alter their statements, “which are already in the public domain
anyway, for the purpose of implicating some people.”

“I’m greatly disturbed by the direction of this country, and as we move towards 2019…”

On his part, Ajayi said the highest police authorities had the right to further investigate any case they deemed fit.

Be that as it may, Ajayi said the Inspector General of Police must be transparent and show impartiality in his work.