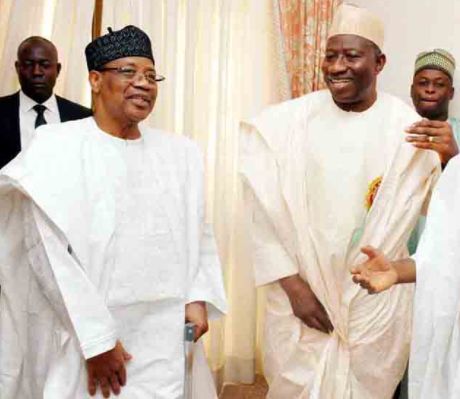 *Battle for 2019 deepens crisis There are moves to
checkmate some Peoples Democratic Party (PDP) governors pushing to
install the party’s chairman at Saturday’s convention, sources said at
the weekend.

But former military President Ibrahim Babangida, some founding fathers,
ex-President Goodluck Jonathan and members of the Board of Trustees
(BoT) may have teamed up to block the governors whose ranks may have
been broken.

Four governors, including two
from the Southeast, may jettison the plan to make a former Acting
National Chairman, Prince Uche Secondus, the chairman, it was learnt at
the weekend.

A party source said: “We are set for a make or break
convention between the old brigades, led by Gen. Babangida and
Jonathan, and the governors.”

According to The Nation, the new brigade includes Wike,
Ekiti State Governor Ayo Fayose, Deputy Senate President Ike Ekweremadu
and state party chairmen “who want to put an end to godfatherism and
hijack the structure of the party”.

The source, who pleaded not
to be named, went on: “The hidden plan of the two groups is the battle
for the 2019 presidential ticket of the PDP. So far, it is apparent that
the founding fathers and Jonathan are beholding to former
Vice-President Atiku Abubakar, to whom they want to give the ticket.

“The
governors seem to have a focus on another candidate either an
ex-governor or a defector into the party. The game is tough because
whoever controls the structure of the party may produce the PDP
flagbearer for the 2019 presidential poll.

“As it is now, the
governors are in control of more delegates than the founding fathers who
are scavenging for delegates. Even ex-President Goodluck Jonathan is
not sure of the 50 per dent control of delegates from Bayelsa State.”

A
former member of the NWC said: “Gen. Babangida, Jonathan and others are
determined to tame the governors. They have succeeded in breaking their
ranks because four of the PDP governors may back out of their
colleagues plans to install Secondus as the next chairman.

“The governors have decided to abandon their colleagues following plea from Babangida and Jonathan.

“But
the governors have the resources to make it a battle to the finish. The
old brigades depend on goodwill whereas delegates need lifeline because
the party had been out of power for two and a half years.”

“Babangida
is crying out now because he has seen the handwriting on the wall that
these governors are in charge. The founding fathers are banking on votes
from the North to stop the governors from hijacking the party.

The
source said: “The situation is dicey. The party may end up in a deeper
crisis because the chairman that will emerge might cause a split. Once
we are in a crisis, 2019 presidential poll will be an easy ride for
APC.”

It was learnt that a former National Security Adviser Gen.
Aliyu Gusau, has been the arrowhead of the outreach by PDP founding
fathers to the governors to allow the chairman to come from Southwest.
They are working for Prof. Tunde Adeniran.

“Gen. Gusau has been
trying to restore the ideals of PDP as espoused by Gen. Babangida and
other founding fathers. But the governors may fight the old brigades to a
standstill.”