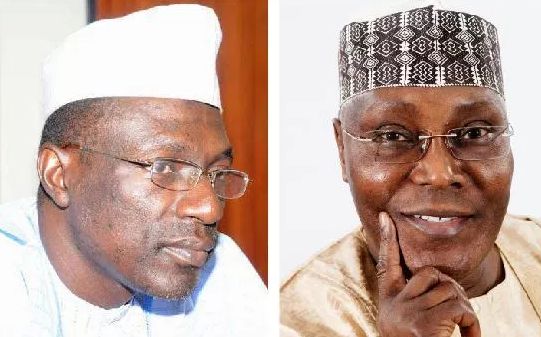 Former Vice-President Atiku Abubakar on Sunday announced his return to
Peoples Democratic Party He made the announcement in a live Facebook
broadcast.

Atiku was among notable politicians who left the PDP
in 2014 to form an alliance that transformed into the All Progressives
Congress. But things have fallen apart.

In the
broadcast, the former vice-president said in the last two years of
President Muhammadu Buhari’s administration, three million Nigerians had
lost their jobs.

According to him, Nigeria needs a non-sectional
party to run the Federal Government and not one that panders to
regional sentiments.

He said he decided to use the Facebook to
announce his return to the PDP because he wanted to reach as many “of
our young people as possible as I have an important announcement to make
about the future of Nigeria.”

He described youths as the future of the nation.

Atiku
said, “I have found in my travels across the country that the number
one concern of young people is whether they will be able to get a job;
for without a job they have no means of sustaining themselves or
starting a family.

“Without the security of a job, we cannot have
security in our country. So without jobs, there is no future for you or
for Nigeria.

“And I also know as a parent that the older
generation is also concerned about jobs for their children and, too
often today, for themselves as well.”

He said he joined the APC
because he had hoped that it would improve lives of Nigerians and that
he was excited about the party’s manifesto to create three million new
jobs a year.

He lamented that the result had not been the change
the people were promised, adding that in the last two years, three
million Nigerians had lost their jobs.

He
added, “Creating jobs is something I know about as I have created over
50,000 direct jobs and 250,000 indirect jobs in my home state of Adamawa
and I also know how the government can create opportunities for jobs.

“In
the last two years, almost three million Nigerians have lost their jobs
and today we have a record 25 per cent of people within the age of 18
and 25 years unemployed. I can see how difficult it is for people to get
jobs.

“The key to creating jobs is a strong economy and that is
what we lack presently. Today, I want to let you know that I am
returning home to the PDP as the issues that made me leave it have been
resolved and it is clear that the APC has let the people, especially
youths, down.”

“But rather than giving a long political speech on
this matter, I thought it would be more helpful to invite you to ask me
questions and share with you my answers.”

I initiated telephone revolution – Atiku
Atiku
said when he was the vice-president in 1999, he was responsible for
deregulating the telecoms sector which he said enabled the country to
increase the number of people who could access telephones from less than
a million then to over 100 million presently.

He said, “This has
resulted in the creation of hundreds of thousands of new jobs from the
top-up card vendors you see on every street corner to the many new
businesses that feed off the mobile phone revolution.

“Some of
you may know that I was elected as the vice-president under the banner
of the PDP, which is the political party I had helped to found some 10
years before.

“And some of you may also know that I left the PDP
four years ago when I believed it was no longer aligned to the
principles of equity, democracy and social justice upon which we had
founded it.

“We need a party that speaks to national sentiments, not regional sisters with only one mother, which is Nigeria.”

Atiku
also dismissed the statement of the Minister of Information, Alhaji Lai
Mohammed, who said he (Atiku) would never be President.

“Nobody
knows the future other than God and to dictate what the future will be
is not within man’s purview. Remember that the PDP said it would rule
Nigeria for 60 years; but did they? But it is about Nigeria, not power.”

Reacting
to the demand by Nigerians on social media for the scrapping of the
Special Anti-Robbery Squad of the police tagged, #endSARS, the former
vice-president called on the Inspector-General of Police, Ibrahim Idris,
to initiate reforms of the squad.

Atiku noted that there was the need for the police and other Nigerians to improve the way they relate with one another.

The former Vice-President said Nigerians were maltreated abroad because they were not well treated in their country.

He added, “We cannot complain about Nigerians being maltreated in Libya and then we maltreat Nigerians back home.’’

The
ruling party stated that since the PDP had been able to “solve its
problems” without Atiku, the APC would do so after his defection.

The
National Publicity Secretary of the APC, Mallam Bolaji Abdullahi said
during a chat on the telephone with one of our correspondents on Sunday.

Abdullahi said, “What reason did he give for leaving the PDP in the first place? Have they (PDP) addressed their problems?

“If
yes; so, they did it without him. If he has found PDP attractive now
because they have solved their problems, it means we will also solve our
problems without him; then he can come back to our party.”

Abdullahi also said the former vice-president had the opportunity to speak out while he was a member of the ruling party.

According to the party, his assertions about happenings within the APC would have carried more weight if he was still a member.

He
said, “I believe that if the former vice-president had spoken out when
he was in the party, perhaps, we would have made progress in that
respect. To now begin to speak after he has left the party shows that
there are some things that he should have done that he didn’t do.”

On
Atiku’s assertion that he would defeat Buhari in the 2019 election,
Abdullahi said, “I believe that the reasons Nigerians voted for
President Buhari in 2015 are still pertinent. They voted President
Buhari because they needed a leader who has integrity, strong on
corruption and capable of defeating Boko Haram. If he stands for
election in 2019, we believe Nigerians would still vote for him,”

‘Atiku’s move to PDP doesn’t affect my ambition’
The
Chairman of the Peoples Democratic Party Caretaker Committee, Senator
Ahmed Makarfi, has said he could still contest the party’s presidential
ticket despite Atiku’s defection.

Makarfi stated this in an
interview published in the current edition of The Interview magazine,
noting that Atiku had earlier left the PDP and had come back.

When
asked about his interest to run, Makarfi said, “By the time I leave as a
caretaker committee chairman on December 9 or 10, there will still be
10 months to the party primaries. By any law or the party’s guidelines,
I’m not excluded.”

Makarfi also said in the interview that Ekiti
State Governor, Ayodele Fayose’s declaration of interest in the party’s
presidential ticket, “is uncalled for and unhealthy.”

“We are expecting a harvest of defections from the APC. Wait a bit and you will see the influx of