Must Read! How to secure a Domain Name for your Nigerian business

by Tony Orji
in ICT Update, INews, News, Socio-Economic Issues
Reading Time: 4 mins read
A A
1
Share on FacebookShare on TwitterShare on Whatsapp 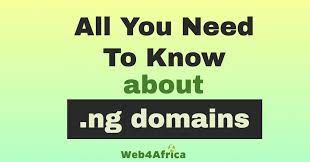 The world has increasingly gone digital and so has the conduct of business – to a large extent. The central point of this digitalization is the internet.

Many Nigerian businesses now have some form of online presence whether in form of a social media handle or a full-blown e-commerce platform. Whatever form the online business presence is, a unique identity in the form of a domain name would still be necessary.

Who needs a Domain Name?

Everyone, every business, every entity that aims to build a brand online needs a domain name. A domain name is the best way to have a truly unique identity on the web and stand out effectively from the massive crowd. An example of a domain name is web4africa.ng – in this case, the Nigerian website address of the web hosting company Web4Africa.

Why a Domain Name?

You may wonder why you would still need a domain name when you can make do with a simple Instagram account, for example? A domain name does not necessarily compete with a social media account – they complement each other.

Which type of Domain Name to Register?

If you are a Nigerian individual or entity, a .ng domain name may be the best for identifying your business online as being Nigerian.

If you wish to target other African countries, you cannot go wrong with a .africa domain name.

Where the international marketplace is your target, there are hundreds of domain types to choose from that fit into just about any category that you can imagine.

Ideally, you simply make use of your business name or brand name in registering a domain name.

How to Register a Domain Name?

When you have decided on the type of domain name to register, you can make use of the Domain Name Search form on the website of a leading domain registrar like Web4Africa, to check availability and find the most ideal domain(s) for your business.

The form would return results showing the names that are available, as well as their respective prices. The domain would typically be registered instantly once your payment is successful.