Breaking! Gov Ortom has asked his people to pick up guns and knives against killer herdsmen 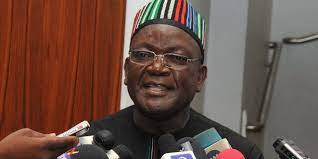 The governor also said no weapon fashioned against him shall prosper.

Benue State Governor Samuel Ortom, has told his people that self-defense is now the best option in the face of marauding cattle herders who damage farmlands and take lives for sport.

Like most states in the north central and north western region of Nigeria, Benue has been battling a recurring farmers-herders crisis since Nigeria’s return to civil rule.

The governor has gone on the record to lambast President Muhammadu Buhari who he says isn’t doing enough to checkmate the herders, most of whom are of Fulani extraction.

Speaking at an interdenominational church service on Sunday, May 23, 2021 at the Chapel of Grace in Government House, Makurdi, Ortom said:

“I’ll no longer announce the deaths of those killed by Fulani herdsmen. Rise up and defend yourselves with weapons not prohibited by law–bows and arrows, spears and knives.

“Get license for dane guns from local government Chairmen and use them to defend yourselves,” he charged.

Ortom once said he ran a couple of kilometers as herders tried to kill him.

He told the congregation that no weapon fashioned against him shall prosper.

“God assured me some time back that as long as I lived within the circle of his presence, no weapon fashioned against me shall prosper,” he said.

Governor Ortom has been very critical of the governing APC since he abandoned the party for the opposition PDP in 2018.