by Tony Orji
in INews, News, Sports Update
Reading Time: 2 mins read
A A
0
Share on FacebookShare on TwitterShare on Whatsapp 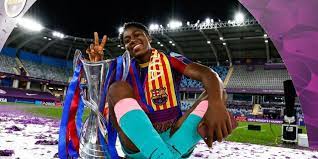 Asisat Oshoala has made history as the first African and Nigeria to win the Women’s Champions League title.

A first half-trashing was what Barcelona needed to take the title and bounce back from their loss in 2019 final to Lyon.

Oshoala made an appearance in the game, coming on in the 71st minute as Barcelona closed out the game to secure the Champions League title.

In the Champions League this season, the 26-year-old played in all Barcelona’s games in the course to their title.

She scored four goals, one in the round of 32 against PSV, another in the next round and two clutch goals in the quarterfinals against Manchester City.

Her first goal against Manchester City came in the first leg of the quarterfinal, opening the scoring in that game with a fine finish just the edge of the penalty area.

She was good in that game and caused lots of problems for the Manchester City defence.

In the second leg away at Manchester, she scored Barcelona’s only goal in a 2-1 loss. It was a simple sitter from a square play to give Barcelona a goal to calm nerves.

She was also excellent in that game, using her pace to trouble the opposition defence and was unlucky not to score more than one goal. 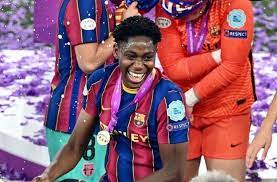 This Champions League title adds to the forward’s several club trophies. She now has 10 titles in her club career, making her the most successful player in Nigerian women’s football history.

She has the chance to add another title with Barcelona still in the race for the Copa de la Reina and set to play Madrid CFF in the semifinals.

The Copa de la Reina also gives Oshoala and Barcelona an opportunity for a historic treble, having already won the Spanish league and Champions League titles this season.