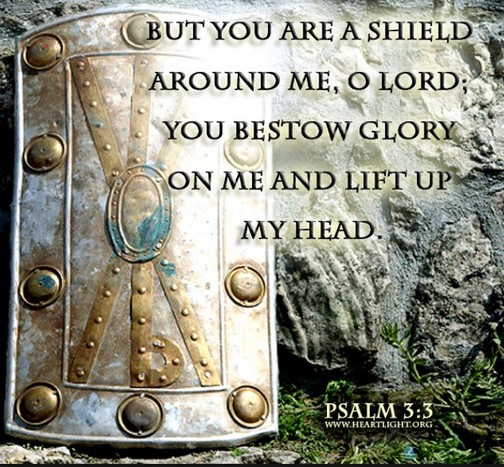 David wrote this portion of Scripture when he was forced to flee from his rebellious son Absalom. The historical record of that uprising is found in 2 Samuel 13ff. David had been at the height of his power when he committed his most famous sin (2 Samuel 11), a “private matter” which had wide and lasting consequences. Although he eventually repented, a chain of events had been initiated of which he had little control. That’s the way sin works. Now the great king is fighting for his life, his chief human adversary being his very own son.

The word “Selah” in the text is an actual transliteration of the Hebrew. In other words like “Hallelujah” and “Amen” it sounds the same in English as in Hebrew. It is thought to be a musical term indicating a pause. I read a comment that suggests it calls the reader to pause and contemplate on what has been written and prepare for what is coming next. For many years we have appreciated a musical group called Selah.

The very first reference to “shield” in the Bible, used in a spiritual sense, was the time the Lord spoke to Abraham. “Do not be afraid, Abram. I am Your shield, Your very great reward” (Genesis 15:1). Perhaps David recalled this passage when he confidently declared, “But thou, O Lord, art a shield for me”. Many versions further elaborate “around me”. This shield does not just protect from only one direction, but it surrounds us. David had a firm grounding in this glorious, unchanging truth. The remainder of Psalm 3 is a confident expression of faith in God’s care.

Throughout the Psalms David uses the image of a shield to describe the care and power of God.

Here’s another example from the Psalms: “The LORD is my strength and my shield; my heart trusts in Him, and I am helped. My heart leaps for joy and I will give thanks to Him in song” (Psalm 28:7).
In the New Testament Paul speaks of the shield in the armor of God in Ephesians 6 as a defense weapon against the “flaming arrows of the evil one”.
Today we encourage each reader to focus on this unchanging God, who ever remains a shield around those who trust in Him. Should you ever face a situation when you are are being taunted by the devil’s insidious lie, “there is no hope in God”,  call to mind this powerful, uplifting, and strengthening Psalm, “God is our refuge and strength, a very present help in trouble” (Psalm 46:1).