by Tony Orji
in Featured, INews, News, Socio-Economic Issues
Reading Time: 6 mins read
A A
0
Share on FacebookShare on TwitterShare on Whatsapp 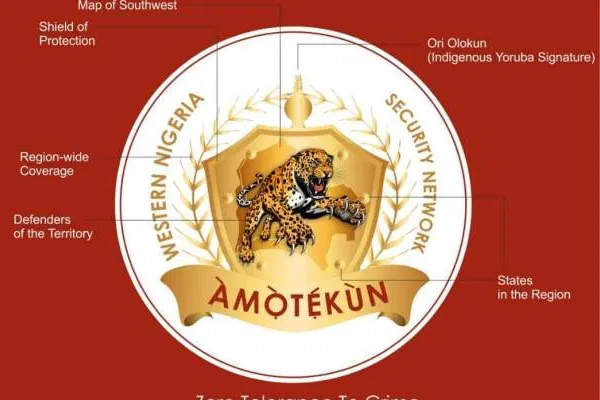 Presidential Candidate of the Mass Action Joint Alliance (MAJA) in the 2019 elections, Princess Prof. Funmilayo Adesanya-Davies has commended the effort of the six governors in the South West region over Amotekun security guards newly created and launched in the region; said it is the greatest thing that has happened to the region since the escalation of insecurity in the South West, and lauds the innovation and its implementation.

We may recall the death of the daughter of Afenifere leader, Pa Reuben Fasoranti, Mrs. Funke Olakunrin – A personal loss and tragic situation for the South West which they all owe as duty to tackle head-long and rescue the people from such situations. Addressing journalists after paying the visit that day, Akeredolu said, “the killing of Fasoranti’s daughter was a great loss to the state. “All of us are worried and there are some measures that have to be taken. We must take whatever steps to tackle this issue of insecurity in order not to allow this to happen again. It is a personal loss to all of us.”

Thus, the South-West governors had at a security summit organised by the Development Agenda for Western Nigeria, said “they would set up the operation, following serial killings and kidnapping in the zone by Fulani herdsmen; as Gunmen, suspected to be herdsmen, had in June killed Olufunke Olakunri, on the Ondo-Ore road. Again, in May, a lecturer at the Obafemi Awolowo University, Ile-Ife, Prof. Olayinka Adegbehingbe, was abducted at the Ikoyi/Apomu junction of the Ibadan-Ife Expressway in Ikire, a border town between Osun and Oyo states”, among others.

The launch of the new security outfit takes place on Thursday 9th in Ibadan, the Oyo state capital, as organised by the six governors, Seyi Makinde of Oyo State, Gboyega Oyetola of Osun State, Dapo Abiodun of Ogun State, Rotimi Akeredolu of Ondo State, Kayode Fayemi of Ekiti State and Babajide Sanwo-Olu of Lagos State, who had last year agreed to establish a security outfit that will put a stop to the insecurity situation in the region. The Development Agenda for Western Nigeria said, “it would ensure that only thorough-bred professionals were drafted into Operation Amotekun to achieve its goals.”

The launching was presided over by Ondo State Governor Oluwarotimi Akeredolu who is the Chairman, Southwest Governors’ Forum. Adesanya-Davies says, ‘AMOTEKUN’ in Yoruba language means ‘THE LEOPARD’, “Yes, the concept is well conceived and the design of their uniform very very creative. The idea is laudable and I pray the Almighty God would grant them successful implementation of the policy in order to return peace back to the South West Nigeria as always.”

At the event, governors from the six states in the South West region declared that the region and its Governors strongly believed in the unity of the Federal Republic of Nigeria. The Ekiti State Governor; while speaking dispelled rumours making the rounds that, the newly launched Western Nigeria Security Network code-named Operation Amotekun is regional police; Fayemi stated that, “the Southwest governors were not out to undermine the integrity and sovereignty of Nigeria but were providing the Yoruba people with a “confidence-building strategy” to “tackle crime and criminality in the region.”

Akeredolu, speaking at the launch held in Ibadan, the Oyo state capital and attended by Governors Seyi Makinde of Oyo, Kayode Fayemi of Ekiti, Deputy Governor of Ogun, Noimat Salako-Oyedele, Deputy Governor of Osun, Benedict Gboyega Alabi,the Ooni of Ife, Oba Enitan Adeyeye Ogunwusi, Otunba Deji Osinbogun and Professor Banjo Akintoye, said that Governors in the region are committed, in all ramification, to the ideals that will make the country stronger and more united.

He said, “that the establishment of Amotekun, is without prejudice to the expectations of patriotic discharge of your mandates as provided in our laws, noting that the region is concerned with the security of its people and property. Akeredolu said, “that Amotekun was neither an alternative to any of the conventional security agencies in the country nor a state police. He said rather, Amotekun would complement and work in collaboration with existing security agencies to provide adequate security of lives and property in the region.”

“The various nation-states within the Federation are diverse, yet almost all of us agree that our strength is in our unity. Consequently, we shall continue to support the Federal Government, under the able leadership of President Muhammadu Buhari, in its avowed commitment and determination to take the country to the next level. Let me on this note thank DAWN Commission for the wonderful job done in crafting the operational framework for Amotekun.”

“The Western Nigeria Security Network operation Amotekun is but a community policing response to a problem that our people would like to put an end to. It is clearly important that we give our people a confidence boosting strategy. Amotekun is a confidence building strategy for our people in the western zone; while those that are going to work in the joint task force with the mainstream security agencies undertake this assignment, with the knowledge of the terrain, language and culture of the community they are going to work.”

”As elected leaders of our various States, our primary responsibility according to section (14)2 of the constitution of the Federal Republic of Nigeria as amended, is the security and welfare of our citizens and that’s what informed the coming together of my colleagues and I to fashion a way that we can utilise to complement the work of our mainstream security agencies that are quite overstretched in their efforts to curb the menace that has afflicted not just our zone but the entire country at the time”, he said region.

“The Commission has taken care of all grey areas that could cause friction in the operations of the personnel that will be deployed for the programme. As a matter of fact, the Nigeria Police will oversee and moderate the activities of Amotekun, thus making its operation conform to the acceptable standards. Amotekun is the Yoruba name for the Leopard. It is not the Tiger, Ekun. There will be adequate recruitment mechanism for the exercise. The conventional security agencies will participate, actively, in profiling the recruits.”

“Nobody with questionable character will participate in the programme. We will make it difficult for undesirable elements to compound the challenges being encountered. Proper background checks will be carried out on personnel to be recruited while the needed registration/identification of such personnel will be done to ensure accountability.” “Let me seize this opportunity to once again appreciate the Nigerian Armed Forces, the Nigeria Police, State Security Services, Nigeria Security and Civil Defence Corps and other security agencies for their unrelenting efforts in combating the various crimes threatening peace and security in the entire country.” He added.

Historically, “Our regional integration, our coming together, should be seen in one light and one light alone: That we are coming together to fight a common enemy. That enemy is not Nigeria; the enemies are the elements among us and their affiliates who are determined to cause commotion within the borders of our states and threaten our peaceful coexistence.” As this launch proceeds today, “we will find that this architecture we have put together is in harmony with the Constitution that we swore to protect.”

Adesanya-Davies recalled in her statement given, drawing from Dr. Mary Gillham Archive Project via Flickr Commons, quoted: “The sporadic and ongoing violent conflicts between herdsmen and farmers in rural communities in Nigeria is a serious threat to human security and development in the country. The conflicts also have a strong potential to spread to other neighbouring countries in West Africa.”

“Initially, these protracted violent conflicts had predominantly occurred in the middle belt states of Taraba, Benue, Kaduna, Plateau, Nassarawa, as well as Adamawa and along the Benue River, which possesses fertile soil and lush vegetation for farming and grazing. However, recent reports have indicated that the clashes have spread to other parts of the country including states in the South West and other Southern regions such as Rivers, Bayelsa and Enugu among others.”

The South-West Amotekun is as such, a local collaborative security agency jointly established by Oyo, Lagos, Ogun, Ondo, Ekiti and Osun states. It’s an idea generated from a security summit organized by the Development Agenda for Western Nigeria (DAWN) Commission in July at the wake of heightened kidnapping and armed robbery mostly on highways in the region. Its personnel will include members of the vigilante group in each state, security experts and conventional security agencies including the police and the Nigerian Security and Civil Defence Corps (NSCDC).

Inspector General of Police, UGP okays this South West Security Outfit. The Inspector-General of Police, Mohammed Adamu, has given the Southwest governors the nod to the launch the region’s security outfit, Operation Amotekun. Mba said the IGP stated: “The Nigeria Police Force, under the leadership of the IGP Mohammed Adamu, is not opposed to any legitimate and community-based efforts aimed at tackling crime and criminality in any part of Nigeria.” But “The IGP would insist that those efforts must be legitimate and be in line with our national security policy and compatible to the national security architecture.”

The President of Oodua Peoples Congress (OPC), Prince Osibote, President of OPC, went on to commend the Amotekun initiative by governors of the South-west states. “While it is a timely, novel and a necessary initiative, we believe that the contribution and participation of all stakeholders must be sought. In our case, we seek to contend with the legitimacy of the OPC involved inorder to achieve an outstanding take off. We state this bearing in mind our modest initiative which has culminated through various permutations into this laudable Operation Amotekun.”

Adesanya-Davies encourages other geo-political zones to embrace this initiative and follow suit; while wishing the South West Region Governors Over Amotekun Security all the best in their endeavours! It is better to take pro-active action now in order to prevent a conflict that could possibly engulf the entire region, and become a humanitarian crisis in the world, thus all hands must be on deck in order to fight insecurity in Nigeria.

2020 Call for Application for NYA membership and prizes

Lawyer drags FG to court over continuous use of Arabic inscription on Naira, Army logo