Lawyer drags FG to court over continuous use of Arabic inscription on Naira, Army logo 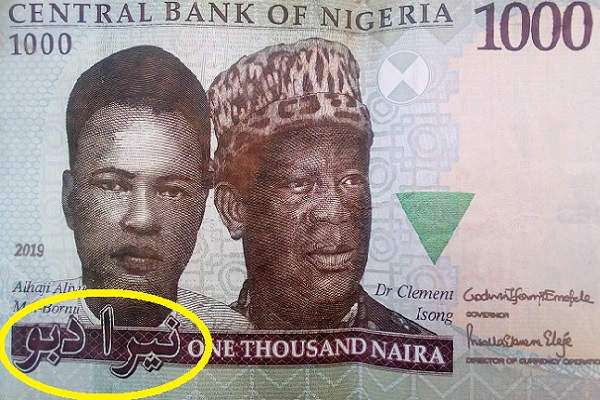 A rights activist and lawyer, Chief Malcolm Omirhobo has asked a Federal High Court to interpret the provisions of Section 10 of the 1999 Constitution, in relation to the inscription on the Naira notes and logo of the Nigerian Army.

The defendants in the two suits are Central Bank of Nigeria, Attorney-General of the Federation, the Nigerian Army, as well as the Ministry of Defence.

Plaintiff is seeking a court interpretation whether by a community reading of Sections 10 and 55 of the 1999 Constitution, it is lawful and constitutional for the defendants to permit the Naira notes to be adorned with Arabic inscriptions.

In the same vein, the plaintiff is asking whether by a community reading of Sections 1(1)(3), 10 and 55 of the 1999 Constitution, it is proper for the defendants to permit the Nigerian Army logo to be adorned, or inscribed in Arabic insignia.

He is seeking a court interpretation whether by the true letter and spirit of Section 10 of the 1999 Constitution, Nigeria is a secular state without any official religion.

Plaintiff wants the court to decide, whether by the true letters and spirit of Section 55 of the 1999 Constitution, the official language of Nigeria is English and under special circumstances Hausa, Igbo and Yoruba.

He wants the court to interpret whether by virtue of Section 1(1) of 1999 Constitution, (as amended), the Nigerian constitution is supreme and its provisions binding on all defendants.

Omirhobo is asking whether the provisions of Section 53 (1) of the Banks and other Financial Institutions Act, which makes the defendants not to be subject to liability in relation to anything done or omitted to be done in relation to any powers conferred on it is lawful.

Plaintiff, therefore, wants the court to declare that by the true letters and spirit of Section 10 of the 1999 Constitution, Nigeria is a secular state without any official religion.

He wants the court to declare that it is improper, illegal, unlawful, and unconstitutional to allow the Nigerian Army logo to be adorned, and inscribed in Arabic language.

He seeks order, compelling the defendants to rebrand the Nigerian Army logo to reflect the true spirit of Sections 1(1) (3), 10, and 55 of 1999 Constitution, for the logo to be inscribed in Nigeria’s official language and devoid of any religious affiliation.

Plaintiff is asking the court to declare that it is illegal and unconstitutional for the defendants to print and issue Naira notes bearing Arabic inscriptions as the legal tender for Nigeria, which official language is English.

Omirhobo seeks an order, compelling the defendants to expunge the Arabic inscriptions from the Naira notes and replace them with their translated meaning in English, which is official language of Nigeria or alternative, in Hausa, Yoruba or Igbo.

No date has been fixed for hearing of the new suits