Africa Cup of Nations 2019: Why do African teams continue to threaten strike action?

by Tony Orji
in Sports Update
Reading Time: 3min read
0
Share on FacebookShare on TwitterShare on Whatsapp
Uganda are the latest team at the Africa Cup of Nations to get embroiled in a dispute over payments.

The
Cranes are through to the second round after finishing second in a
group containing hosts Egypt and DR Congo. But their players boycotted
training on Tuesday.
The country’s FA, Fufa, has said the players are trying to “renegotiate” their remuneration.
It is the fourth pay dispute to hit the tournament so far.

Nigeria had similarly refused to train after not receiving a $10,000 (£7,940) match bonus that had been promised.
Meanwhile
Cameroon arrived in Egypt late after an unresolved row over bonuses.
The players had refused to get on the plane – the same tactic they
employed at the 2014 World Cup.
And there were concerns that the
opening game would not even happen after suggestions came from the
Zimbabwe camp that the players had threatened to boycott the match
against the hosts Egypt.
Ultimately that game did go ahead. 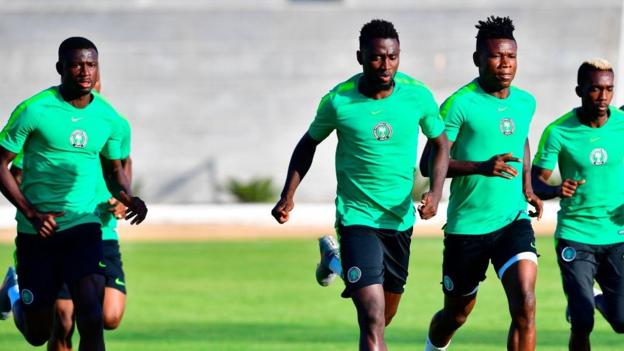 In a word – leverage.

The way that payments work in
tournaments is that the further a team goes, the greater the amount of
money they receive. Thus, success in major championships have the
potential to bring revenue to a country’s football federation.
In
theory some of that money should end up with the players as bonus
payments – they should also receive some money for qualifying.
For
players based in major European leagues, those tournament payments are
not necessarily a huge amount in comparison to their club wages.

All of England’s players, for example, donated their bonuses for
their surprise run to the semi-finals of the 2018 World Cup to charity.
But for players based in African leagues, those payments constitute a great deal of money.
Indeed,
last season in Cameroon, not only bonuses but basic wages from the
clubs were not being paid, forcing players across the country’s top
divisions to stage a series of strikes.
Eventually, former Indomitable Lions captain Geremi Njitap filed a complaint direct to Fifa, which resolved the matter.
But the episode highlighted the important role that international appearance bonuses have for some players.

Sometimes, however, these payments do not appear after the
tournaments. Some football associations have little accountability;
others are opaquely managed – and even end up being suspended by Fifa.
Over time, players have grown deeply distrustful of the very football federations they are picked to represent.
So,
aware that after a tournament their ability to exercise pressure
individually on their FA is greatly diminished, they strike before the
competition begins.
By threatening not to play, players create a
double bind for their countries. Not only would it be damaging for their
image, it also would dramatically reduce any money that the FA would be
looking to get themselves.

The tactic has proved effective over the years – having been employed
by at least one African team at every World Cup since 1990.
What’s
more, star names in teams over the years, such as George Weah and
Didier Drogba, have been much higher-profile than their country’s FAs –
and have not been afraid to use their presence to support their less
well-known (and well-off) team-mates.
Indeed at some tournaments, a country’s president has had to personally intervene in order to get things going again.
Famously,
in Brazil in 2014, $100,000 payments for Ghana were flown in, in cash
in briefcases, and unloaded at the airport in Rio – where the Brazilian
authorities took a 17% cut, before the money was sent out across the
city to the players.
Nothing like that has happened in Egypt – but nevertheless, the disputes don’t seem to be going away any time soon.