by Tony Orji
in Inspiration
Reading Time: 3min read
1
Share on FacebookShare on TwitterShare on Whatsapp

Some months ago, a friend informed me about a writing competition which I later participated in. After a short period of time, my friend called me and in the course of our discussion, I jokingly told him I had won the competition. He said I was joking because he had checked to know who the winner was even before he called me. Then, he began to sympathize with me telling me things like, “don’t worry, you’ll win the next one” and stuffs like that just so I don’t feel bad.

As he was saying all that I didn’t want to feel bad so I quickly thought of what to tell him to kill the thought of self pity that was quickly building up in me.

Gbam! I got the perfect and most appropriate sentence and I told him not to worry because I’d won already. He was confused on what I meant so I went further and said, “I’ve gotten the victory because I have the positive and right attitude to failure.”

My friend was silent for a while and afterwards, he sighed deeply. I could bet that he was surprised at what I’d said. I was certain that he didn’t expect that from me. However, he told me that he was happy with my resolution and that he understood what I meant.

I wouldn’t stop trying and get myself depressed just because I failed once. Hell no! Why would I when Victory has been redefined by me? Why would I when it’s in my hands to decide what I want to believe?

The Oxford Learners Advanced Dictionary defines Victory as, “Success in a game, competition, etc.” Nonetheless, I’ve got good news for you. I have an addendum to this definition.

“Victory is obtained and defined in positive attitudes to failure or defeat.”

Therefore, what you tell yourself or believe in is very important, even more than victory itself; your belief will earn you victory or defeat.

Have you failed a course last 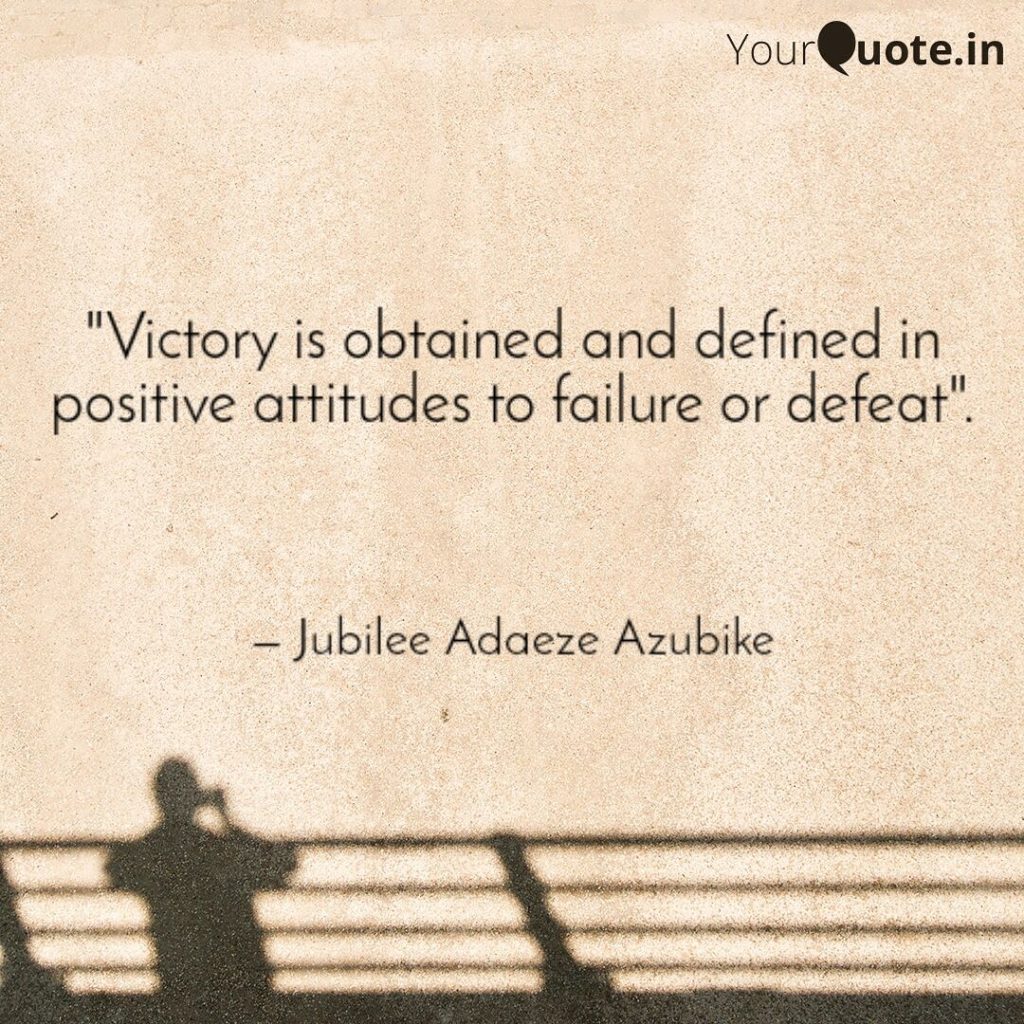 year? Were you amongst those whose story or poem were rejected as a result of mediocrity? Did you fail that subject so badly that you had to repeat? Were you denied that job opportunity for no just cause you could think of? Recount those past defeat for good this minute.

See you as a Victor despite everything. Yes, you are a Victor since you mustered the courage to have a rethink and find out for yourself where you got it wrong.
You are a Victor for being resilient enough to try again.
For being alive and not committing murder because you failed is enough proof that you are a Victor already.

I’m not going to promise you success in everything you’ll do this year though I wish you that. However, I’m offering you a standard by which you would measure your Victory such that when you fail, you’ll remind yourself that Victory has been redefined.

If only you can have the right attitude to these failures, then you are victorious. And remember, the only way to emerge victorious is when you don’t quit after you fail. Be bullheaded or strong headed when it comes to winning and you shall win.

As you’ve step into this year, look back at all those past mistakes and carry yourself as a Victor because that’s what you are.

See you at the top!

Don’t Be a Parasite! Support the Business of your Friends and Family