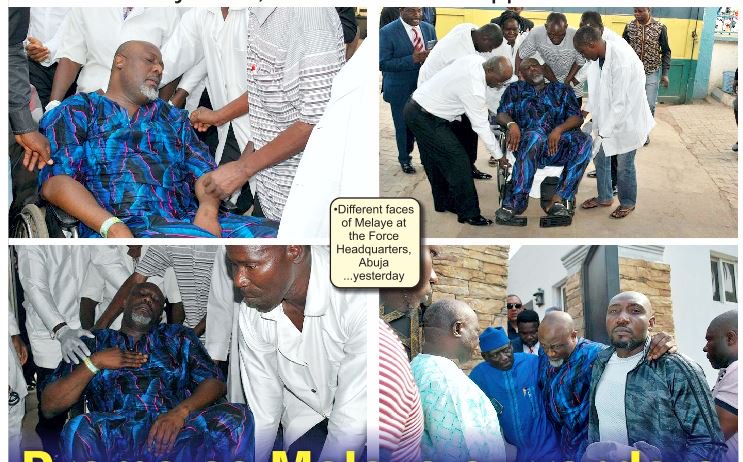 After about eight days of a hide and seek game with the police, Senator
Dino Melaye (Kogi West) yesterday gave himself up in Abuja. And in a
dramatic fashion too.

The senator who apparently had locked himself up in his high brow
Maitama, Abuja residence on sighting the police penultimate Friday,
voluntarily threw the gate open for them yesterday to come in, and
immediately fell down in front of the waiting police team.

He looked exhausted and had to be helped into a car that took him, in a long convoy to the police headquarters.

He had told The Cable by phone last week that he was out of town and
that he would report to the police this week on returning from his trip.

The Police were not convinced that he was not in the house. They vowed
to keep surveillance there until he gave himself up which he did
yesterday.

Prior to his opening the gate for the police, several of his fellow
federal lawmakers had driven down to the house to see and accompany him
to the Force Headquarters to honour the police invitation.

He was also helped out of the car at the police headquarters.

At a point, some men put an inhaler to his mouth to help him breathe
well. Sources attributed the fainting to possible asthma attack.

Not wanting to leave anything to chance, the police took him to an undisclosed hospital for proper treatment.

One of the sources said: “It is only someone who is alive that we can
investigate. We need him to get well before we proceed with any
investigation.” 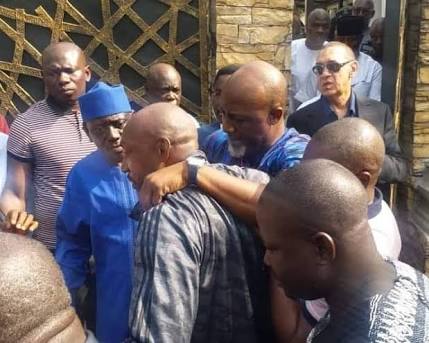 In a statement last week, Melaye alleged “a deliberate attempt by the
Kogi state government to kill me, to destroy me.” He added: “I have
written the inspector-general of police (IGP). My international passport
is with the Nigerian police, I have a court order that it should be
released to me but the IG has refused to honour the court order.

“If the police that is supposed to maintain law and order cannot obey
court order, how do they expect citizens to obey court orders? As I
speak to you, my security detail has been withdrawn since April and it
is all in a deliberate attempt to expose me, so that I will be killed
and destroyed.

“The same SARS from Kogi that shot at me are the same SARS in the
photograph occupying my compound and 80 percent in mufti. I thought that
recently that there was an instruction that SARS should wear uniform… I
am in seven different courts and anyone that they will do will be
number eight. I’m not afraid to be arraigned because my hands are clean
and I know the God I serve will deliver me.”

Peter Obi Speaks: This Election Is Between Light & Darkness