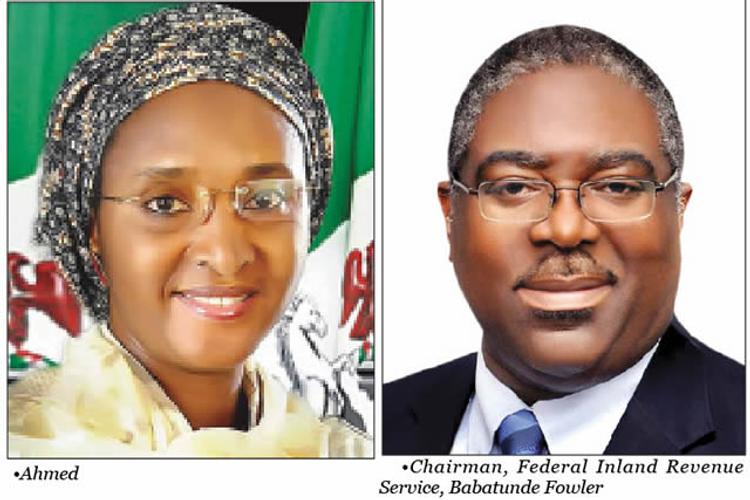 From January to September this year, the Federal Government generated a
total amount of N6.93tn as revenue from oil and non-oil sources.

The N6.93tn revenue was arrived at based on the analysis of data obtained from the Central Bank of Nigeria.

A breakdown of the revenue showed that the sum of

N2.08tn was generated in the first quarter while the second and third quarters recorded N2.31tn and N2.52tn respectively.

The amount generated in each of the quarter was far below the budgeted quarterly estimate of N3.32tn.

When spread over a nine-month period, the budgeted quarterly estimate amounts to about N9.96tn.

This implies that with the total actual revenue of N6.92tn, the
government was unable to meet its revenue target which resulted in a
revenue shortfall of N3.04tn during the nine-month period.

Out of the actual revenue of N6.93tn, the sum of N4.08tn was earned from oil sources.

This, according to the analysis of the data, is about 58.7 per cent of
the total earnings of the country during the nine-month period.

An analysis of oil revenue figure of N4.08tn revealed that Petroleum
Profit Tax and royalties accounted for a huge chunk of oil revenue with a
total contribution of N2.68tn.

This is followed by other oil revenue with N1.08tn while crude oil and gas sales contributed the balance of N312bn.

For non-oil revenue, a breakdown of the N2.85tn collections showed that
the sum of N820.95bn was generated from Value Added Taxes, N1.08trn from
Companies Income Taxes while N509.08bn came in from Customs and Excise
duties.

The balance of N433.36bn was generated from other non-oil revenue sources.

Speaking on the revenue shortfall, some finance and economic experts
said the budgetary spending of the government needed to be reduced in a
manner that would reflect the rate of revenue inflow.

The Director-General, Institute of Finance and Control of Nigeria, Mr
Godwin Eohoi, said, “We have so much relied on oil revenue within the
last 45 years and with the level of uncertainty in oil revenue, the time
has come now for us to review our fiscal position.

“There is a need for reform of the country’s tax administration system
to enable the Federal Government to raise more revenue from capital
gains tax. Our tax to Gross Domestic Product ratio is one of the lowest
in the world and we need to address that.”

In his comment, the Head of Banking and Finance Department, Nasarawa
State University, Dr. Uche Uwaleke, said there was a need for the
National Assembly to come up with legislation to improve the level of
coordination between fiscal and monetary policy authorities.

He said the law would enable both authorities to effectively come up
with the right policy mix in addressing the fiscal challenges facing the
economy.

He argued that the failure to properly coordinate both fiscal and
monetary policies was having negative influences on the economy through
deficit financing.

He added that a weak policy stance on one area could burden the other area and would make the economy to suffer in the long run.

He said, “The need for policy coordination arises in the cast of structural reforms and liberalisation of the financial sector.

“Such reforms can only proceed within the framework of a supportive
fiscal policy that provides macroeconomic stability, fiscal discipline
and avoidance of taxes that discriminate against the financial activity.

“The constitution empowers the legislature with three basic functions of representation, lawmaking and oversight.

“To this end, the National Assembly can facilitate synergy between
monetary and fiscal policies towards economic diversification by making
laws designed to put an end to budget delays and fiscal deficit.”

The Minister of Finance, Mrs Zainab Ahmed, had said the decline in
revenue had made it imperative for state governments to reduce
unnecessary overhead costs in order to enthrone fiscal discipline.

She said the move was vital in order to increase the Internally
Generated Revenue of states so as to efficiently maximise the scarce
resources needed to stimulate the economy.

Ahmed, who spoke at a conference with the theme: ‘Unlocking the
potential of the non-oil sector as a sustainable source of government
revenue’, maintained that states should look inwards to harness various
avenues for revenue.

She said, “It is on record that due to persistent domestic fall in oil
revenue over the past years, it became extremely difficult, if not
impossible for us to meet duly budgeted obligations.

“This happened because of the age-long over-reliance on oil, even though
Nigeria is abundantly endowed with multiple resources, which provide
varied sources of revenue.

“There is stupendous potential for diversification of revenue. We can
reflect soberly on our national endowments and make conscious efforts to
exploit and manage them effectively.

“Let me remind us that we need to develop cost-effective strategies to
increase our IGR, reduce unnecessary overhead costs, enthrone fiscal
discipline and transparency so as to optimise available limited
resources, while efforts are sustained to broaden our revenue base.”

Ahmed said the Federal Government would continue to ensure that all
federation revenues were accounted for in the most transparent manner
and managed efficiently.

She said, “Let me acknowledge and commend the wisdom behind the
development of the new revenue reporting template that was engineered by
the Commissioners for Finance.

“It is imperative to mention that its implementation will be one of the
key reforms in revenue remittances into the federation account.

“The administration of President Muhammadu Buhari has demonstrated
necessary political will and has been very supportive in our drive to
explore other relevant revenue sources, so as to be able to turn the
tide in favour of the federation account and the nation in general.”

She further urged state governments to develop various sectors in their
states to consolidate on the revenue allocation they receive from the
federation account.