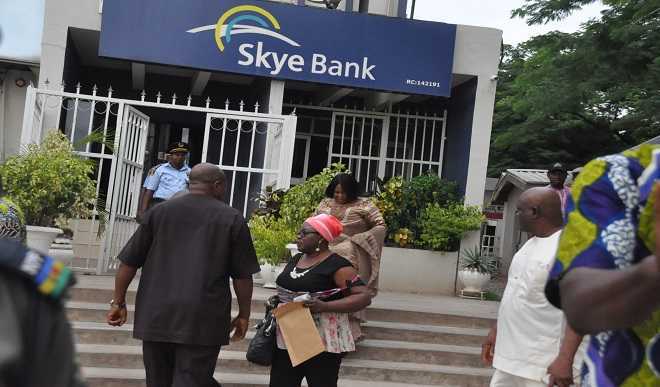 The Nigeria Deposit Insurance Corporation (NDIC) has said the takeover
of the defunct Skye Bank PLC has been able to save more than 6,000 jobs
and over NN949.60 billion in customers’ deposits as at June 2018.

The Central Bank of Nigeria (CBN) and the NDIC
had in September this year withdrew the operating licence of Skye Bank
and transferred its assets and liabilities to a newly licenced bank,
Polaris Bank owned by the Assets Management Corporation of Nigeria
(AMCON), for failure of its shareholders to recapitalise the bank.

Speaking
at the NDIC special day at the ongoing International Trade Fair in
Lagos, the managing director and chief executive of NDIC, Umaru Ibrahim,
noted that the option of a bridge bank was reached as it is less costly
to the macro economy.

Explaining that bridge bank is a temporary
bank created to operate a failed bank until a buyer can be found, Umaru
who was represented by the head of corporate communications, Muhammed
Kudu, said the resolution option was reached as is less disruptive to
rendition of bank services, unlike outright liquidation or depositors’
payoff.

“The staff are retained in the bridge bank and with this
expert arrangement, Polaris was able to continue banking operations in
the 277 branches of the bank, over 6,000 jobs were saved and depositors
have unhindered access to deposits in excess of N949.60 billion as at
June 2018,” he said.

He noted that all those that contributed to
the failure of the bank are being investigated by relevant agencies of
the government and would be prosecuted to serve as deterrent for others.

“As
provided for in the NDIC Act 2006, When financial institutions fails,
depositors of Deposit Money Banks (DMBs), Non-Interest Banks (NIBs) and
Primary Mortgage Banks (PMBs) are reimbursed up to a maximum unit of
N500,000, while the maximum insured coverage for depositors of MFBs is
N200,000.

“However, it is important to stress that depositors who
have funds in excess of the insured limits are paid dividends from the
liquidation of failed banks depending on the quality of their assets and
outcome of debt recoveries by the NDIC.

“The changing landscape
of the Nigerian financial sector brought to fruition the broadening
dimension of Mobile Money Operators (MMOs) in Nigeria. Although, this
effectively altered the scope and depth of regulatory/ supervisory
interventions, but the NDIC remains resolute in its determination to
safeguard depositors’ funds.

“As it stands, the number of
licensed MMOs by CBN is currently 23, with eight being Bank-Led and the
remaining 15 Non-Bank Led. As at 2017 year end, the number of accounts
in the MMOs stood at over 153 million. The NDIC provides deposit
insurance coverage to subscribers of MMOS to the maximum limit of
N500,000 through the Pass-Through Deposit Insurance Framework. This is
to further promote financial inclusion drive across the broad spectrum
of the Nigerian economy.”