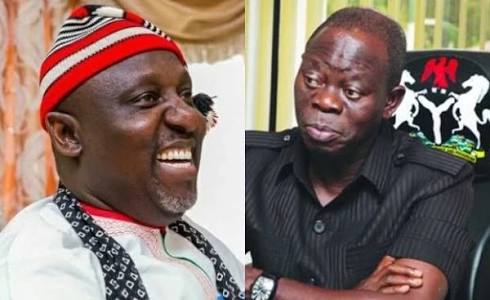 Imo State Governor Rochas Okorocha has dismissed planning to build a
political dynasty in Imo State, by insisting on his son-in-law Uche
Nwosu as the All Progressives Congress (APC) candidate in Imo State, as
the young man won the primary election.

Okorocha said Oshiomhole is chief of nepotism in office.

The
governor in a statement signed by his Chief Press Secretary Sam
Onwuemeodo explained how Nwosu won the primaries, yet Oshiomhole has
listed Senator Hope Uzodinma as the APC candidate.

He said:
“Adams Oshiomhole led National Working Committee (NWC) sent a 12-member
Committee to Imo State to conduct the APC primaries with Alhaji Ahmed
Gulak as Chairman. The primary elections were slated for October 1,
2018. Because the Committee members arrived late, and after all said and
done, he announced that the primary would then take place the following
day being October 2, 2018.

“Alhaji Gulak didn’t wait to Conduct
the primaries. He fled Owerri. And he told the world that he fled Owerri
by 4:30am because there was kidnap attempt on his person. The Secretary
of the Committee Barr. Henry Idahagbon from Edo State with seven other
members who stayed behind went ahead with the primaries and Uche Nwosu
won the governorship primary.

“However, Comrade Oshiomhole told
Nigerians that he had disbanded the Gulak committee and discarded all
that came out from that committee and promised to set up a new one. In
line with his promise, he set up another 13-member Committee led by
Brigadier-General Ibrahim Agbabiaka.

“October 6, 2018, the
Agbabiaka Committee Conducted the primaries and Uche Nwosu won that of
governorship. The Prof. Osunbor Appeal Panel also looked at the whole
scenarios and also declared Uche Nwosu Candidate of the party. These are
our narratives. Let Adams Oshiomhole or Gulak contradict us.

“All
of a sudden, the same Oshiomhole who disbanded the Gulak Committee and
whatever came out of it, developed strange love for Gulak and his
blunder. That is the crux of the matter in the Imo APC case”.

Okorocha
described Oshiomhole as a builder of dynasty. He named people he
referred to as the chairman’s family members in positions or APC
candidates in Edo State.