Should Ambode Be Impeached For “Daring” To Contest Against Candidate Backed By Tinubu? 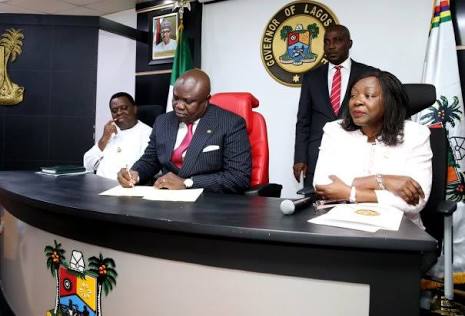 *Tension in Lagos over governor’s fate

There is palpable tension in the All Progressives Congress (APC) in
Lagos state over Monday’s governorship primary of the party as the
chance of Governor Akinwunmi Ambode in securing a second term ticket is
said to be uncertain.

Unfortunately, he could even be impeached as Governor.

36 out of the 39 APC lawmakers in Lagos state House of Assembly endorsed
the candidacy of Babajide Sanwo-Olu on Saturday even as there are
speculations that the governor might face impeachment for his insistence
to re-contest despite losing the goodwill of party stakeholders.

57 local council chairmen had earlier queued behind Sanwo-Olu. And to
further brighten his chance, another APC governorship aspirant, Babafemi
Hamza earlier on Saturday stepped down for him.

The Director General of Babajide Olusola Sanwo-Olu Campaign Organization
(BOSCO), Mr. Tayo Ayinde in a statement welcomed the decision of Hamza
to step down for Sanwo-Olu.

“As a group, we wish to profoundly acknowledge and commend Dr. Femi Hamzat for his show of sportsmanship to our common cause.”

How will Ambode come out of this conspiracy? Time will tell.

2019: Those Who Will Determine PDP Presidential Candidate