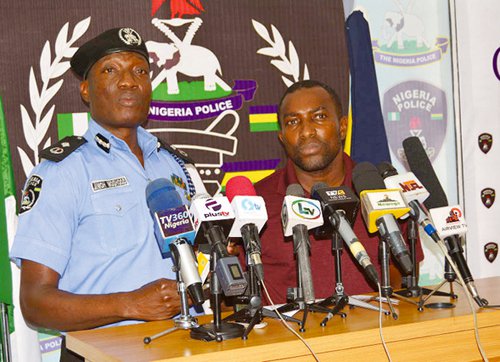 The police headquarters in Abuja yesterday paraded a 43-year-old man for
allegedly threatening former Vice President Atiku Abubakar to either
withdraw from the 2019 presidential race or have his plane blown up
mid-air.

Akpan, who hails from
Edemaya village in Ikot Abasi Local Government Area of Akwa Ibom State,
was reportedly arrested while fleeing to Lagos.

He was also said
to have extorted huge sums of Nigerian money and foreign currencies from
unnamed high profile citizens with false claims of being an operative
of the United States of America’s (U.S.A’s) Central Intelligence Agency
(CIA) and Federal Bureau of Investigations (FBI).

Moshood also
said the suspect, who speaks fluent English, Ibibio, Russian and
Portuguese languages, will remain in their custody until investigations
are concluded and he is arraigned in court.

He added: “On the
receipt of a complaint of threat and intimidation from former Vice
President Atiku Abubakar, 43-year-old Augustus Akpan was trailed and
eventually arrested by the IGP Intelligence Response Team.

“Akpan
was arrested at the toll plaza on Lagos-Ibadan Expressway in Lagos
State while he was on the run to escape arrest. During interrogation, he
confessed to the crime and admitted that he resorted to the threat and
intimidation when efforts to extort money from the former Vice President
were unsuccessful.

“The suspect also admitted in his
confessional statement that he is a professional fraudster and not
working for any party. He said his mention that ‘Let Buhari run against
your against your PDP members’ in his threat message to the former Vice
President was merely to divert attention.

“The suspect is fluent
in English, Ibibio, Russian and Portuguese languages. The phone and the
subscriber identification module (SIM) card he used for the threat and
intimidation were recovered from him and were discovered to have been
stolen from a lady who identified him as the person who robbed her few
months back.

“Akpan further confessed that he had threatened,
defrauded and extorted huge sum of Nigerian money and foreign currency
from so many prominent personalities and their families while posing as
an FBI and CIA agent.”

Throwback Photo Of E.A. Adeboye Being Ordained As A Pastor Of RCCG In 1975