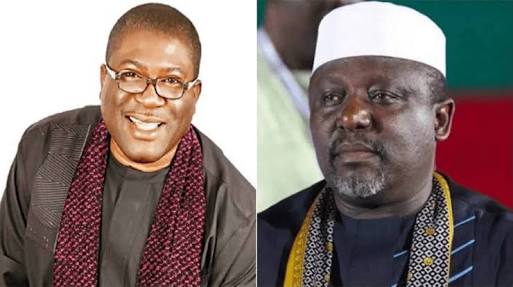 The face-off between Imo State Governor Rochas Okorocha and his
estranged deputy, Eze Madumere, still persists even after the court
nullified Madumere’s impeachment. Madumere was impeached on July 31.

What are the issues leading to their fight?

The court said the House of Assembly did not comply with constitutional provisions in the process.

It, therefore, dismissed the impeachment as unconstitutional, and of no legal effect.

But
barely 24 hours after the judgment, Okorocha, in a statement by his
Chief Press Secretary, Sam Onwuemeodo, said Madumere “is confused and
does not know what next to do”.

The statement reads: “The
judgment on the impeachment of Prince Eze Madumere was delivered on
September 25. We withheld our reaction because we needed to acquaint
ourselves with the crux of the judgment. We have read it, and the crux
of the judgment by Justice Benjamin Iheaka is that the chief judge
constituted the seven-man panel outside the seven days approved by law.

“We
read a statement by Madumere himself, but the fact remains that he is
confused and does not know what he wants. He signed the statement as
deputy governor and is still parading himself as a governorship
aspirant on the platform of the All Progressives Congress (APC),
especially about 48 hours to the primary.

“Madumere thanked two
other aspirants – Ikedi Ohakim and Emeka Ihedioha – for their
contributions to his victory, but insulted the man who took him up from
the floor to the level he is today.

“He said his offence was that
he stood by the people for justice. May we ask Madumere when he became
an apostle of justice and over what? He was chief of staff and later
deputy governor, meaning that from 2011 till he was impeached about two
months ago, he was the second in command in the government. And now he
is struggling to remain deputy governor and aspiring to be governor. Men
like Prince Madumere are bitter or ugly case studies.

“Okorocha’s
only offence is that he did not anoint Madumere as his successor. And
you now ask whether it is compulsory that every deputy governor must
succeed his boss as governor. If the answer is no, then Madumere should
count his teeth with his tongue.’’

But Madumere said he was being victimised for opposing the government’s “anti-people policies”.

He
said: “I thank God for his grace. Truly, it has been a journey of
grace, and it is a victory for constitutional democracy. I hail the
judiciary for the courage against all odds because the judgment is
historic and it has reinvigorated the people’s faith. Indeed, the
judiciary has proved that it is the last hope of the common man. It has
been a battle against intimidation, threat, oppression but the truth has
prevailed.

“My crime was that I said no to anti-people policies,
and it has been intimidation and threat all this while. But it is a
journey of grace and we shall succeed.”

Justice Iheaka chided
Chief Judge, Paschal Nnadi, and the Attorney-General Militus Nlemadim,
for not adhering to Section 188 (5) of the 1999 Constitution as amended
in the impeachment proceedings against Madumere.

He lampooned
Speaker Acho Ihim (ninth defendant) and the Assembly (10th defendant)
for violating an interim order he issued stopping the impeachment
process.