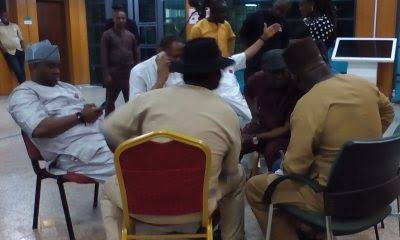 Peoples Democratic Party (PDP) senators are taking turns to sleep over
at the National Assembly Complex in Abuja to prevent a noctunal removal
of Senate President Bukola Saraki by their All Progressives Congress
(APC) colleagues, a senator said yesterday.

“I woke up this morning from my night shift and I will still be going
back to my night shift. That is to say we are keeping vigil.

“We
are rotating the shift among ourselves. As regards what they are saying
about impeachment (removal), it is not possible because the
international community is aware of their plot.”

Senator Philip Gyunka (PDP Nasarawa North) spoke in Lafia, the state
capital, yesterday when he presented his letter of intent to contest for
Nasarawa State governor, to the leadership of the PDP in the state.

He
continued, “Don’t be discouraged. They will intimidate you as they do
to us. Like myself, I don’t know how many times they have been calling
me. We didn’t know they have come to truncate democracy. But the Senate
president, being a product of PDP, has come to the rescue of the the
situation.

“We are keeping watch on their plans. If they want the
Senate President removed, which is impossible they must have two third
majorities.

“They have been attempting and failing. I know they
will still make attempts but they will not succeed because I know
Nigerians will not allow them to make mockery of the nation’s democracy.

“If you hear a lawmaker speaking, he is speaking the minds of thousands of people.

“How
then should someone, who was appointed and has neither gone to the
rural areas to feel the pulse of the people, nor held town hall meeting
be insisting that a man that was duly chosen by his colleagues be
removed at all course.

“Oshiomhole (Adams) should be educated
that this is not unionism. This is an issue that has to do with the
Constitution and we will not allow him to violate it.”