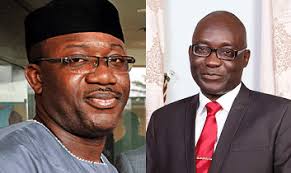 The candidate of the Peoples Democratic Party in the July 14
governorship election in Ekiti State, Prof. Kolapo Olusola, has filed a
petition against the electoral victory of the All Progressives Congress
candidate, Dr. Kayode Fayemi.

In the over 700-page petition filed
on Friday, Olusola asked the Ekiti Governorship Election Petition
Tribunal to declare him as the winner of the election “having scored the
majority of lawful votes”.

The incumbent Deputy Governor of Ekiti arrived at
the tribunal at about 6pm in company with his running mate, Deji
Ogunsakin; one of his lawyers, Ola Olanipekun (SAN); and the state PDP
chairman, Gboyega Oguntuase.

Speaking with journalists, Olusola
said he had resolved to reclaim his mandate which was allegedly hijacked
by “political desperadoes”.

According to Olanipekun, the election was characterised by falsification of results and snatching and stuffing of ballot boxes.

Olusola
said, “Today, I formally filed the much expected petition against the
results of the July 14, 2018 governorship election, which was openly
manipulated by political desperadoes, using instruments of the Federal
Government.

“Like I have maintained, I am challenging the
election results, not out of desperation to be governor, but because of
the future and posterity, and largely on behalf of the people of Ekiti,
who were taken aback by the outcome of the election.

“Without
doubt, the will of the people was subverted by those who have chosen to
take Nigeria back to the dark days of stuffing and snatching of ballot
boxes and outright falsification of election results; I believe they
deserve to get justice.

“As law abiding citizens of our country,
the only path of honour to take in a situation like this is the process
that we have initiated today, to seek redress against the use of
security forces and other instruments of the Federal Government to
suppress the will of our people.”

Olusola alleged that the APC
was desperate to govern in all states in the country, especially Ekiti
because of Ayo Fayose, whom he said was perceived as uncompromising.

He
also alleged that the APC had destroyed all the gains made by the past
PDP-led government on free, fair and credible elections. 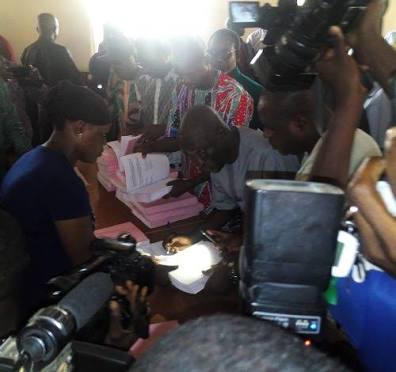 “The mood of Ekiti people when the beneficiary of the electoral robbery
was declared winner and up till today is a pointer to the resolve of the
people not to accept the subversion of their will and we have answered
their calls to use the judiciary to get back their mandate.”