2019 Presidency: The Men Who Will Determine PDP Candidate 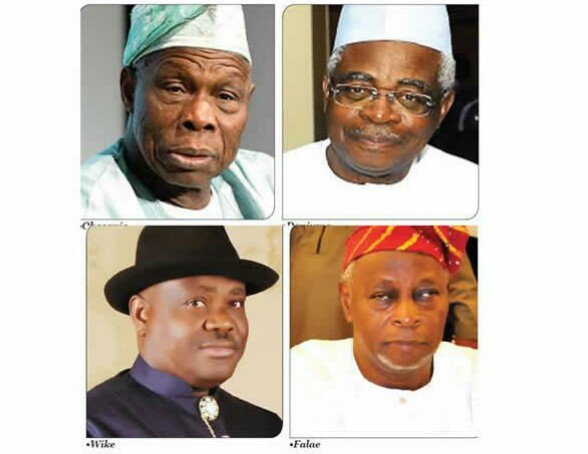 In the quest to sack President Buhari, power play is on within the main
opposition party, Peoples Democratic Party )PDP. The Punch’s Olusola
Fabiyi writes on those who will play significant roles in determining
the party’s presidential candidate.
Who are they and what are their influences?

The National publicity secretary of the PDP, Kola
Ologbondiyan, said Nigerians would determine the presidential candidate
of the party in the February election. He may be partly correct because
delegates who will vote at the party’s special national convention
where the candidate will be elected are citizens of the county.

However,
while the delegates will queue with ballot papers in their hands and
the list of aspirants printed on them, they may not be there to exercise
their personal conviction on who to vote. This is because each delegate
is believed to have at least a godfather, whose bidding will be
reflected on his choice of the party’s presidential candidate.

For
the PDP and members of its coalition groups, the 2019 presidential
election is too critical to be left in the hands of not too informed
delegates.

A former governor of Osun State, Prince Olagunsoye
Oyinlola, expressed the seriousness he and his co-defectors associated
with the election at the inauguration of the coalition’s national
secretariat in Abuja on Thursday.

At the event, he warned his
group to know that its key members would be dealt with by the ruling All
Progressives Congress if President Muhammadu Buhari returns to power in
2019.

Oyinlola, a retired general, asked his co-travellers in the plot to know that what they are involved in is like coup plotting.

“Coup
is not illegal when it succeeds, but when it fails, plotters are
hounded up in jail and later killed. So, be ready and know the
implications of what you are involved in,” he told his audience in a
clear language.

Sometimes ago, when the National Chairman of the
PDP, Prince Uche Secondus, led a delegation to visit former President
Olusegun Obasanjo at the latter’s residence in Abeokuta, their host also
sounded the same warning to his visitors.

To buttress his point,
he was also said to have asked one of his personal aides to bring his
already-packed bag, which he said contains his drugs, few clothes and
other essentials, ready to be arrested by the Federal Government over
their decision to install a new President for the country in 2019.

“You
know I’m used to it. I have been arrested before, I was tried for coup
that never existed and I was jailed. Therefore, I’m used to it. It is
you who are not used to it. I’m telling you this to let you know that
they will come for us if we fail in this task,” he reportedly told his
astonished audience.

Such is the seriousness in the camp of the
opposition as the nation prepares for the 2019 general elections. They
believe that politics is a serious business that will be too expensive
to be left in the hands of one person. Though many notable politicians
have come out to signify their readiness to fly the party’s presidential
ticket in the February election, their fate may have to be determined
by just a clique in and outside the former ruling party.

Others considered
to be with the potent war chest to fight for the ticket, but who have
yet to openly declare their ambition are a former governor of Kano
State, Rabiu Kwankwaso; Governor of Sokoto State, Aminu Tambuwal; and
the President of the Senate, Dr Bukola Saraki.

While they are
expected to traverse the length and breadth of the country to seek votes
from the delegates, the deciders of their fate may nevertheless be a
few, within and outside the party.

OLUSEGUN OBASANJO
He’s
been described by many adjectives. Some are complimentary while others
could be full of disdain for the former military head of state and a
two-term president. But instead of sitting by and get burdened with the
comments of those who have resentment for him, Obasanjo has remained
hardened in his unwavering conviction that President Buhari’s
performance since he assumed office more three years ago, remain
everything but unsatisfactory.

He has said that allowing Buhari
to remain in office after four years will mean a reinforcement of
failure. Like a soldier that he is, when Obasanjo is convinced about a
cause, he puts in everything in him into it. That is why even though he
has torn his membership card of the party that brought him into office,
Obasanjo has returned to the political battlefield to strategise with
other like-minds just to achieve their aim of getting a replacement for
his junior in the army. With his involvement in the formation of the
coalition that involves 39 other political parties and associations, it
is evident that Obasanjo will be one of those who will determine the
standard bearer of the PDP, which is the dominant political party in
the coalition.

T.Y. DANJUMA
Like Obasanjo, Theophilus
Danjuma is a retired general. He played a prominent role in the
conspiracy that brought Buhari into power. He was said to be one of the
major financiers of the APC campaign. The unabated killings in the
country particularly in his native state of Taraba, is believed to have
created a wedge between Danjuma and the Buhari government.

Recently,
the former army chief openly expressed his frustration about the
killings of his kinsmen when he alleged that there was collusion among
the security agencies and the killer Fulani herdsmen. He told the people
in an unambiguous language, to embrace self-defence.

Danjuma,
who is believed to be stupendously rich, hardly talks but when he does,
the contents are so heavy that he cannot be ignored. That was why even
the Presidency and the army authority were forced to react to his
allegations on the killings. While the Presidency waved the allegation
aside and denied it, the army was forced to set up a probe panel to
investigate it.

Danjuma seems not to care about the ranting of
the military and the Presidency over that, as he is said to have joined
the “brave patriots” to search for an alternative and acceptable
candidate that will slug it out with Buhari next year.

CHIEF OLU FALAE
He
is not a member of the PDP. In fact, he is the national chairman of the
Social Democratic Party. Naturally, he ought to be concerned on how
his party would win the presidential election. That however is not the
case. Falae, who was a former Secretary to the Government of the
Federation, played a prominent role in the formation of the coalition
that was put together with the sole aim of removing Buhari next year.

He
has asked all the political parties involved in the coalition to bury
their individual ambition and join hands and present a single candidate
for the battle. Going by his presentation at the inauguration of the
coalition at its national secretariat last week Thursday in Abuja, and
since the PDP remains the largest political party among the partners,
Falae is expected to be carried along and also contribute on who would
fly the PDP flag for the coalition.

NYESOM WIKE
“Wike
the wicked,” as he’s called by his admirers because of his frankness
while speaking on national issues and politics in his home state, Nyesom
Wike, the governor of Rivers State, will also be a major player in the
PDP presidential candidate selection. Apart from being a governor of an
oil-rich state, Wike is also one of the major financiers of the party.
He played a major role in the installation and the sacking of the
erstwhile Acting National Chairman of the party, Senator Ali
Modu-Sheriff. Wike was also at the forefront of the election of the
current National Chairman of the party, Prince Uche Secondus and
majority of members of the party’s National Working Committee.

The
former minister of state for education, is also believed to have close
rapport with majority of the present and former leaders of the party.
With his deep purse and involvement in the bid to rescue the party from
the Ali-Modu group who had all defected to the APC, no discussion can
hold on who will be the presidential candidate of the PDP and the name
of Wike will not be mentioned. Some people are nevertheless speculating
that he is nursing an ambition of becoming the running mate of one of
the aspirants.

IBRAHIM BABANGIDA
A former head of a
junta in Nigeria, Ibrahim Babangida is among those being consulted as
the PDP begins its tortuous journey to get a credible presidential
candidate. His palatial home in Minna, Niger State has since become a
Mecca of sort for politicians from the PDP, seeking relevance in the new
dispensation.