Saraki Replies IGP: “Send Your Officers To My Office” 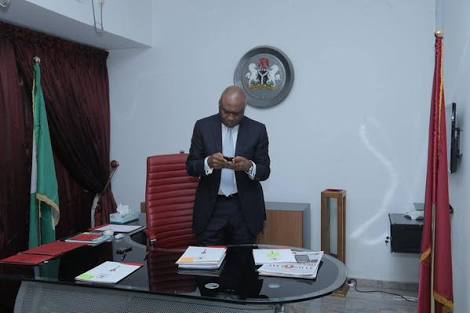 Senate President Bukola Saraki has asked the inspector-general of
police, Ibrahim Idris, to send his personnel to his office to take
further statements on the Offa robbery incident that took place in Offa,
Kwara state, in April, where over 30 people lost their lives in the
heist.

In a letter, dated July 23, 2018, IGP Idris
directed Saraki to report himself to the Intelligence Response Team
office in Abuja on Tuesday, July 24.

The police said the suspects arrested in connection with the incident named Saraki as their sponsor.

However,
the senate president failed to show up, opting instead to preside over
the day’s session at the National Assembly complex.

In a letter
dated July 24 and addressed to the IGP, Saraki said President Buhari had
given a directive that if the police wanted additional information,
they were to either to send a police personnel or get a written response
from him.

The Senate President further told the IGP that
Tuesday’s incident with the police has left him concerned for his
physical safety, and requested that investigators be sent to his office
instead to question him.

He explained that if he had honoured
the invitation while Ike Ekweremadu, deputy senate president, was
prevented from leaving his residence, their absence would have “voided
the sitting of the senate”.

“For the record, I should mention
that I received your letter at 8:30 pm on Monday 23rd July, 2018,
inviting me for the next day at 8am. The two lawyers whose advise I
needed were in Calabar and Lagos and have to travel to Abuja today,” the
letter read.

“As your are aware, the deputy president of the
senate was on unable to leave his residence this morning to preside over
the senate having been prevented from doing so by security agents. If
he had been able to preside over the senate, I would have honoured your
invitation.

“The absence of both presiding officers would have
voided the sitting of the senate. This would have been damaging to
national interest, particularly in the light of very important
legislative matters that needed to be addressed in view of the imminent
recess of the national assembly.

“These included consideration
of the electoral bill which was incidentally passed today. You will
recall that Mr President had earlier directed as a courtesy to this
office that in the event of any request for further information from me,
you should either send your personnel to my office or obtain a written
response from me.

“I need to place on record as well, that
following the incident of being harassed and threatened at my residence
by the police early this morning, I’m deeply concerned over my physical
security.

“I request you therefore, to please assign your
personnel who need information on this matter to meet me in my office
immediately (after) plenary, today or tomorrow or at any other day at
your convenience.”

Campus Life—— 5 benefits of group assignment every student should know