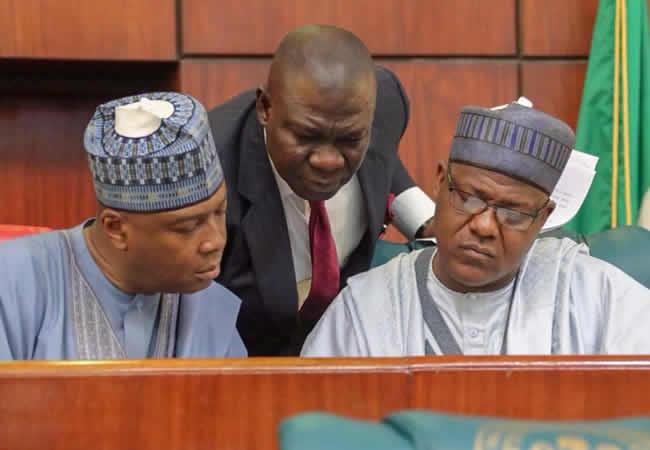 As the battle for the control of the National Assembly rages between the
federal lawmakers of the ruling All Progressives Congress and their
Peoples Democratic Party counterparts, officers of the caucuses of the
parties have disagreed on the possibility of the removal of the
presiding officers of both chambers.

While the
APC members contended that they did not require two-thirds majority to
remove Senate President Bukola Saraki and Speaker Yakubu Dogara, the
elated PDP legislators argued that their APC counterparts would find it
difficult to effect a leadership change in the National Assembly if the
presiding officers dump APC for the PDP as anticipated.

The
Peoples Democratic Party Caucus in the House of Representatives said any
attempt by All Progressives Congress members to intimidate or remove
the Speaker, Yakubu Dogara, will be stoutly resisted.

The PDP
members, in separate interviews with The Punch, said without a
comfortable control of the House, the APC would remain powerless,
despite having the majority.

However, a member of
the Parliamentary Support Group, a group of APC senators loyal to
President Muhammadu Buhari, Senator Ali Ndume, insisted that Saraki must
quit as Senate President should he defect from the APC to the PDP.

The
Deputy Minority Whip in the House, Binta Bello, on her part, said there
was no basis for anybody outside the speaker’s
Tawafa-Balewa/Dass/Bogoro Federal Constituency to ask him to step down.

She also observed that the speaker was a product of all political parties, not only the APC.

“The
people of his constituency voted for him. All politics is local. It’s
the same people that can ask him to leave not just any member of APC.

“Again,
is he just a speaker for the APC? If he has to go, all of us must come
together again to say ‘go.’ This is not about APC alone,” she added.

Another senior member from Kogi State, Sunday Karimi, wondered if the APC had the number to remove Dogara.

Karimi
stated, “Do they have the number? To impeach the speaker or shake him
in any way, you will need to have two-thirds majority in the House. Do
they have it? In ordinary times, to get 240 out 360 is tough, much less
in abnormal times like now when everyone’s eyes are wide open.

“They
are powerless and wasting their time without two-thirds. In any case,
things will fall into their proper places when we resume in September.”

The
Deputy Minority Leader of the Senate, Senator Emmanuel Bwacha, said the
majority party would be known when the National Assembly returned from
recess.

Campus Life—— 5 benefits of group assignment every student should know