Rowdy Session In Senate Over ‘Lopsided Appointments’ By Buhari 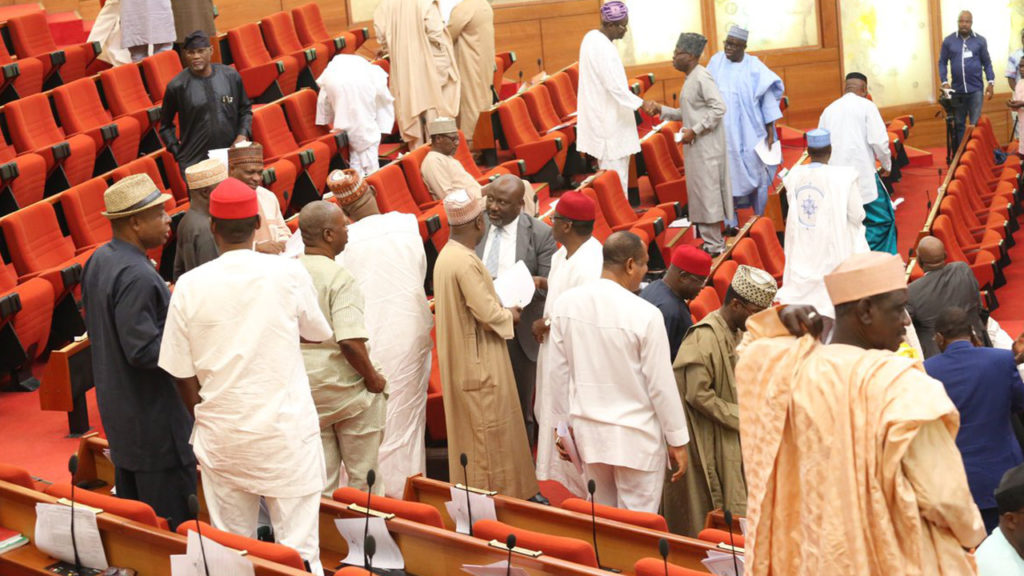 There was uproar in the Senate on Thursday following complaints against
alleged lopsided appointments into the federal boards and parastatals by
President Muhammadu Buhari.


Soon after the Senate President, Dr. Bukola
Saraki read a letter from President Buhari on the appointed of former
Deputy Governor of Central Bank of Nigeria, CBN, Tunde Lemo as Chairman,
Board of Federal Road Maintenance Agency, FERMA, the Managing director
and six other others as members, deputy Senate President, Senator Ike
Ekweremadu raised a point of order.

Senator Ekwerenadu who
referred the Senate to section 14(3) of 1999 Constitution, picked holes
in the appointments of chairmen of boards without recourse to federal
character principle, with a particular zone of the country which is
South East being neglected and marginalised.

According to Senator
Ekweremadu, the action of President Buhari was totally unacceptable to
him because the leadership of these agencies were coming from a
particular part of the country. Ekweremadu noted that he was not against
anyone, but against the non adherence to federal character principle in
line with the constitution and for national unity.

At this
point, Senate Leader, Senator Ahmad Lawan in his intervention said that
whenever the government sends a list containing the list of
appointments, the government does its work very well. It was at this
point that the hallowed chamber became very rowdy as there were
reactions, shouts from the Senators.

Senate President Bukola
Saraki tried to bring down the tension and the rowdy nature, describing
the issue as speculations, adding that what has just happened was a
letter from the President. Saraki then gave the Senator Tijani Kaura,
APC, Zamfara led Committee on Federal Character to investigate the
issues raised by the deputy Senate President and report back at plenary
next week Tuesday, adding that the probe would ascertain if there are
such cases or not.

Another round of uproar erupted when the
Senate leader, Ahmad Lawan read executive communication for the
screening of the Chairman and Commissioners of the Federal Civil Service
Commission with Dr. Bello Tukur Ingawa from Katsina as Chairman.


Senator Chukwuka Utazi, PDP, Enugu North came under Order 15 still
on the same subject matter, saying the screening should be kept until
the Senate Committee on Federal character comes up with its report.