Obasanjo, Other Ex-Generals Begin Moves To Sack Buhari In 2019 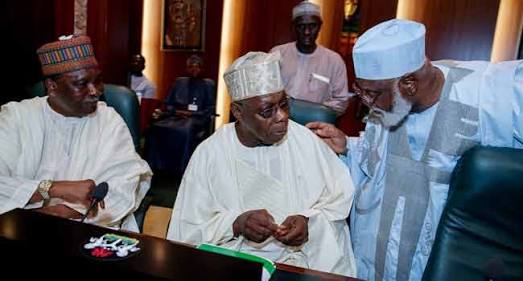 Some retired generals may have formed a strong coalition to defeat
President Muhammadu Buhari in the highly anticipated 2019 Presidential
election.

Why are those who helped Buhari become president, after he tried on his own three times and failed, now turning against him?
The Nation’s Sunday Oguntola reports on the inside details of the plot.

Investination has shown that some ex-generals, led by former
President Olusegun Obasanjo, are perfecting plans to stop the reelection
bid of President Buhari.

It was learnt that because of their
disagreements with some key policies (and obvious failures) of Buhari
administration, the ex-generals have formed what a source called “a
strong coalition against Buhari’s second term ambition in 2019.”

The army of opposition
Some
of the prominent ex-generals presently associated to the coalition,
according to our findings, include Lt. General Theophilus Danjuma,
former Military President Ibrahim Babangida, former Head of State
Abdulsalam Abubakar, General Zamani Lekwot and General Joshua Dongoyaro,
among others.

It was learnt that though the ex-generals also
have personal issues among themselves leading to mutual suspicion, they
may have decided to jettison them for the purpose of fighting a cause
they consider fundamental to the survival of Nigeria and Nigerians.

All
the prominent ex-generals so far linked to the coalition reportedly
have personal axes to grind with the current administration over several
issues; it was learnt, leaving them no option than to unite against
Buhari, who they see as (incompetent).

The plot, according to
sources, is spearheaded by Obasanjo, who on January 23 wrote Buhari to
put his reelection bid on hold, accusing him of non-performance.

The
letter, sources confided, was carefully scripted and timed to rally
other ex-generals who were skeptical over the workability of the plans.

Once
the letter became public knowledge, many of them reportedly became more
relaxed and comfortable with the group, pledging to work with other
good Nigerians to ensure the defeat of Buhari at the 2019 poll.

It
was gathered that the ex-generals, some of whom served under Obasanjo
in the military, have been holding meetings for over a year on how to
stop Buhari.

Investigations revealed several of the meetings held
in Abuja while a few elements in the coalition have also met overseas
to perfect strategies.


Aiming for the spine
Obasanjo, who has accepted the
daunting task of being the brain-box and face of the coalition, has been
harping on the economic performances of the current administration,
declaring them as appalling.

In his January 23 letter, the former
President had stated: “I knew President Buhari before he became
President and said that he is weak in the knowledge and understanding of
the economy but I thought that he could make use of good Nigerians in
that area that could help.

“Although, I know that you cannot give
what you don’t have and that economy does not obey military order. You
have to give it what it takes in the short-, medium- and long-term.
Then, it would move.

“I know his weakness in understanding and
playing in the foreign affairs sector and again, there are many
Nigerians that could be used in that area as well. They have knowledge
and experience that could be deployed for the good of Nigeria.”

The
insecurity challenge, especially the herdsmen attacks, also offers the
coalition a massive outlet to bark at the administration. Again,
Obasanjo touched on this in his letter.

He had stated: “The
herdsmen/crop farmers issue is being wittingly or unwittingly allowed to
turn sour and messy. It is no credit to the Federal Government that the
herdsmen rampage continues with careless abandon and without finding an
effective solution to it.

“And it is a sad symptom of
insensitivity and callousness that some governors, a day after 73
victims were being buried in a mass grave in Benue State without
condolence, were jubilantly endorsing President Buhari for a second
term! The timing was most unfortunate.

“The issue of
herdsmen/crop farmers’ dichotomy should not be left on the political
platform of blame game; the Federal Government must take the lead in
bringing about solution that protects life and properties of herdsmen
and crop farmers alike and for them to live amicably in the same
community.”

The allegation of collusion by the military in the
recent killings across the nation by Danjuma last March also exposed the
current administration to public outcry.

Danjuma’s outburst on
alleged ethnic cleansing sat well with many in the northcentral who
respects his position on political and security affairs.

It was
gathered that the coalition has compiled a list of weaknesses or
drawbacks of the current administration, which would be highlighted at
different fora from time to time.

A source said they will also
work with pressure groups, civil society organisations and human rights
bodies, whose primary role would be to organise protests and
demonstrations across the nation.

Battle for global acceptance
There
are indications that the civil society organisations are currently
being mobilised by a Senior Advocate of Nigeria (SAN) with a history of
good working relationship and vast networks with the bodies.

It
was gathered during the week that very soon, the civil society groups
will start unleashing statements and position papers, which would be
followed up with peaceful protests across the nation to expose the needs
for Nigerians to reject Buhari at the poll.

Another plank of the
well-articulated ploy is to mount a campaign against the administration
at the international scene to sell to world powers the idea of
defeating Buhari.

This strategy is allegedly directly coordinated by Obasanjo using his vast network and connections in the international scene.

Politics of ex-generals
Also
coordinated directly by Obasanjo, the political strategy has taken off
with the adoption of African Democratic Congress (ADC) as the platform
for the former President’s Coalition for Nigerian Movement (CNM).

ADC,
which is working towards the fusion of other parties like the Social
Democratic Party (SDP) and Peoples Democratic Movement, as well as 23
smaller ones, has reportedly started building consensus on a northern
presidential candidate to stop Buhari.

The ex-generals are
reportedly working on the theory that a strong northern candidate will
share votes from the region with Buhari while getting support from the
northcentral, south-south and southeast. This permutation, it was
learnt, is why they are considering a vice presidential candidate from
the southeast or southwest.

Some of the ex-generals are said to
be toying with the idea of backing the Peoples Democratic Party (PDP)
should it present an “acceptable” presidential candidate they could work
with in 2019.

But it was learnt many have serious misgivings
about supporting PDP because of its perception challenges, making the
ADC option a more reasonable path for the ex-generals.

The Nation
gathered last week that Buhari is however not unawares of the plot
against him by some members of his former constituency.

A
presidential aide, who spoke under strict conditions of anonymity, told
our correspondent: “These things are there to see. We know what they are
up to…”

Interesting Things To Do When Life Doesn’t Go Your Way