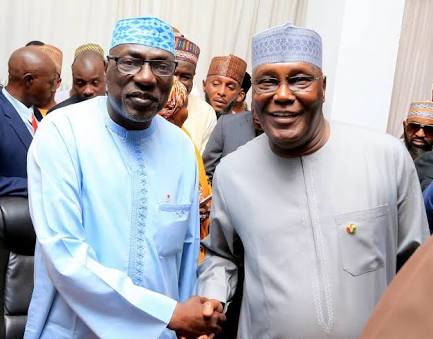 A former Governor of Kaduna State and immediate past Caretaker Committee
Chairman of the Peoples Democratic Party, Ahmed Makarfi, has joined
the race to contest the nation’s presidency in 2019.

The
two-term-senator said at a press briefing in Kaduna on Sunday that
after wide consultations with party men and women as well as other major
stakeholders, he had decided to seek the party’s nomination to contest
the poll.

According to Makarfi, he is now ready to pick the PDP nomination form ahead of the 2019 presidential election.

He
explained that after the consultations, the result was quite positive
and encouraging and that it was fair enough for him to come out and join
other “capable party men and women” to seek the party’s nomination for
the 2019 presidential election.

Makarfi will battle a former Vice
President and presidential hopeful of the Peoples Democratic Party,
Atiku Abubakar, who had recently appointed a former governor of Ogun
State, Otunba Gbenga Daniel, the Director-General of his 2019
presidential campaign.

Though he had yet to intimate his party
through writing, he added that “one has to come to the decision to seek
the nomination before you even seek formally.”

He said, “I have
not written to the party but who do you consult with? It is the same
party men and women that you consult informally.

“At this stage,
it is to seek the party’s nomination. The successful nominee will become
the candidate that will stand for the election.

“But first thing
first. If one’s party does not put one forward, one can’t say he is
contesting the presidency yet. At this stage, I have come to the
conclusion that it is okay, based on the consultations that I have had.”

“I
have been consulting across the country since I left as the chairman of
the party. It’s just consultations and not an endorsement. But it gives
you an opportunity to feel the pulse and it will tell whether to go
forward or not to go forward.

The consultations have been quite
positive and I believe it is fair enough to come to the conclusion that
one should join other equally capable party men and women who have shown
interest in seeking the party’s nomination for the 2019 presidential
election.”

Makarfi also noted that he had all it took to lead
Nigerians to the promise land and thanked the All Progressives Congress
for campaigning for the PDP through “bad governance.”

How To Prevent Leg Cramps During A Long Journey

How To Stop ‘Fighting’ and Start Enjoying Your Marriage