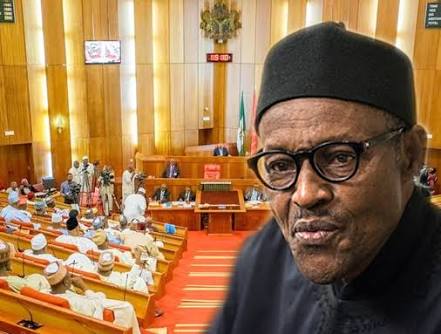 The fragile relationship between the Presidency and the National
Assembly may have collapsed, following yesterday’s emergency joint
session of the National Assembly.

See All The Conditions…

According to The Nation, a flurry of activities culminated in yesterday’s session.

On Sunday, the police invited Senate President Bukola Saraki to defend
his relationship with the April 5 Offa robbery suspects, who killed 33
people, including nine policemen.

Some of the suspects claimed that they were thugs being used and armed
by the Senate president and Kwara State Governor Abdulfattah Ahmed.

On Monday, after a meeting with Vice President Yemi Osinbajo and some
security chiefs, including Inspector General of Police Ibrahim Idris,
Saraki was told to send his explanation within 48 hours without
appearing before the police.

Yesterday’s National Assembly joint session was described as an emergency executive session on the state of the nation.

No timeline was given for compliance with the resolutions.

The resolutions include: “The security agencies must be given marching
orders to curtail the sustained killings of Nigerians across the country
and protect life and properties of Nigerians as this is the primary
duty of any responsible Government.

“The systematic harassment and humiliation by the Executive of perceived
political opponents, people with contrary opinions, including
Legislators and Judiciary, by the police and other security agencies
must stop.

“There must be strict adherence to the Rule of Law and protection for all citizens by the President and his appointees.

“The President must be held accountable for the actions of his
appointees and must be ready to sanction those that carry out any act
which will ridicule or endanger our country and democracy.

“The Government should show sincerity in the fight against corruption by
not being selective and also prosecute current appointees that have
cases pending against them.

“The sanctity of the National Assembly should be protected and preserved
by the Federal Government of Nigeria by not interfering in its business
and prosecuting those who invaded the Senate to seize the mace.

“Democratic elections must be competitive and inclusive by removing the
present reign of fear and intimidation particularly as we approach the
forthcoming 2019 elections.

“The National Assembly will work closely with Civil Society
Organisations, Trade Unions and NGOs to further deepen and protect our
democracy.

“The President must take immediate steps to contain the growing level of
unemployment and poverty in Nigeria, especially now that we have
advantage of the oil price having risen to $80 per barrel.

“We reaffirm our earlier resolution of vote of no confidence on the
Inspector General of Police who does nothing other than preside over the
killing of innocent Nigerians and consistent framing up of perceived
political opponents of the President and outright disregard for
constitutional authority, both executive and legislative.

“Finally, the National Assembly will not hesitate to evoke its
Constitutional powers if nothing is done to address the above
resolutions passed today”.

Signs that all was not well became apparent immediately the Senate
reconvened for plenary and went into an Executive Session around 11am.

The closed session ended around 12.30 pm.

Saraki announced after the closed session that they discussed National Assembly and Senate issues in particular.

He added that they resolved to hold a joint executive session with the House of Representatives.

Saraki mandated Senate Leader Ahmed Lawan to move a motion for the
Senate to go to the House of Representatives chamber for the emergency
joint Executive Session.

Lawan did. The motion was seconded by Minority Leader Godswill Akpabio.

Members of the upper chamber were also said to have held a “strategic
meeting” on Monday night to articulate issues for discussion.

Looks like the die is cast. We wait to see who blinks first.