What Buhari Told President Trump In US 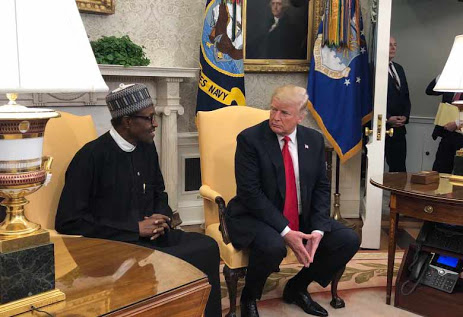 Mr. President of the United States of America, ladies and gentlemen of
the media, it has been a pleasure and honour to visit Washington, D.C.,
at the kind invitation of President Donald Trump. Nigeria and the United
States share a long history of close and cordial relations, which
encompass political, economic, military, social and cultural
cooperation.

Our two countries maintain a strategic partnership for peace and
security, conflict resolution as well as a global fight against
terrorism. We also share common futures as secular federal states,
practicing a similar democratic model of governance and committed to the
universal values of fundamental human rights and freedoms, free
enterprise, social justice and the rule of law.

President Trump and his team and myself and the Nigerian team discussed
issues related to security, trade, governance, human rights and
humanitarian crises.

We congratulated the leaders of the North and South Korea on their
historic summit, and we applaud them for the positive commitment they
have made towards denuclearization of the Korean Peninsula. President
Trump deserves a great deal of credit for his statesmanlike role in
transforming so dramatically the course of events in that region.

We also congratulated the United States government on the important role
it played in the defeat of ISIS, although some of the remnants have
found their way to the Sahel region.

We recognise the strong United States support in our fight against
terrorism, and also appreciated very much the United States agreement to
sell 12 Super Tucano A-29 warplanes and weapons to Nigeria to
effectively fight terrorism.

To contain the spate of insurgency in Nigeria, the Federal Government
has adopted a monthly sectorial approach involving related government
agencies to address the social, economic and political dimensions, while
the armed forces of Nigeria assist the (inaudible) authority to provide
security and maintain law and order.

This programme is currently embarking on a number of projects, including
secure operation centers and integrative farms comprising poultry, fish
pond and greenhouse farming, among others.

A number of international partners, including International Organisation
for Migration (IOM), have contributed to the success of the Operation
Safe Corridor. We indicated that we will appreciate whatever support we
could also get from the United States.

We express gratitude to the United States support in the reconstruction
and rehabilitation efforts in the Northeast, as well as humanitarian
assistance to the internally displaced persons through agencies such as
the United States Agency for International Development (USAID) and other
international partners.

The United States of America has been to date the biggest contributor to
the humanitarian response, and last year gave approximately half a
billion United States dollars in cash and in kind contribution through
the United Nations and other inter-governmental organisations. This
mainly supported protection activities, health, food assistance and
shelter.

We are doing all we can to secure the release of the remaining abducted
school girls from Dapchi and Chibok. In this context, we will continue
to welcome United States collaboration in intelligence gathering,
hostage negotiations and information sharing.