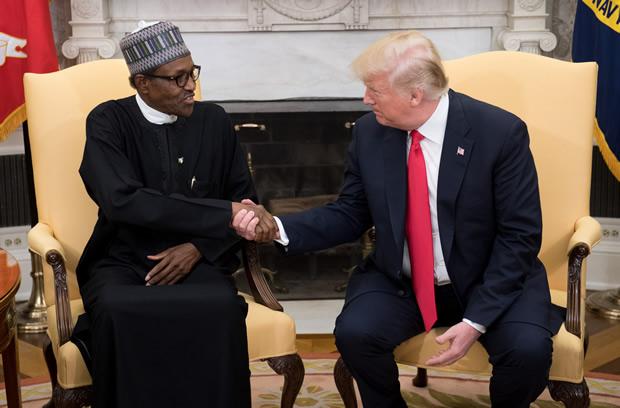 The Christian Association of Nigeria, civil rights groups and the
pan-Yoruba socio-political group, Afenifere, have said the comment of
the United States President, Mr. Donald Trump, on the killings in
Nigeria was a wake-up call to President Muhammadu Buhari.

Trump, before a closed-door meeting with Buhari on Monday, described the killing of Christians in Nigeria as a serious problem.

CAN, in its reaction, said Trump hit the nail on its head when he
informed Buhari that Christians were being killed in Nigeria, noting
that the American leader told the Nigerian government the right thing.

The spokesman for CAN President, Pastor Bayo Oladeji, said the President should address the killings in the country.

“Every time we tell
them Christians are being killed, they don’t want to listen, but that is
the truth. If the President cannot protect Christians, we have two
options, we fight back. The law of the land permits self-defence.
Secondly, come 2019, we vote him out. If he says there is nothing
Christians can do, let him dare us,” Oladeji stressed.

According
to Punch, two civil society organisations, the Committee for the Defence
of Human Rights and the Centre for Anti-Corruption and Open Leadership,
said Buhari needed not to be told by external powers such as America
before the killings in parts of Nigeria were tackled and curbed.

The
CDHR President, Malachy Ugwummadu, said, “The admonition by Trump to
stop the killings is a reaffirmation of the constitutional obligation of
the government, but we needn’t hear it from external powers.

“It
is not just sufficient to make promises, but it is time to fulfil the
existing ones. There are already existing agreements between the US and
Nigeria which should be visited, not just military cooperation.”

Also
the CACOL Director, Debo Adeniran, said the US could assist in ending
the killings and violence in the Middle Belt region through the
provision of attack helicopters and other sophisticated weapons to
Nigeria.

He said, “The present administration must make the most
of that visit to the United States. One, the US has signified its desire
to offer weaponised helicopters to us. That means that we have more
replenished arsenals to deal with all the internal aggressions facing
us.

“Also, that America has agreed to work with us to defeat Boko
Haram and other criminals is a plus which the government must take a
firm hold of. We should also look inwards at our own security
capacities.”

Yoruba socio-cultural group, Afenifere, described
Trump’s advice to Buhari as good admonition, noting however that it was
not only Christians that were being killed.

Afenifere
spokesman, Yinka Odumakin, said the President disappointed Nigerians by
absolving Fulani herdsmen of involvement in the killings, stressing that
he spoke as “the patron of Miyetti Allah, not as the President of
Nigeria.”

“He should not have gone to the international stage
and say Fulani herdsmen don’t carry AK 47; that destroyed everything for
the President. This is why Afenifere said he should make a choice
between the Presidency and being the patron of Miyetti Allah. He spoke
in America in defence of Fulani herdsmen as their patron, not as the
President of Nigeria and that is conflict of interest,” Odumakin said.