PDP Set To Change Name? To Bring Back Saraki, Kwankwaso, Other Big Names 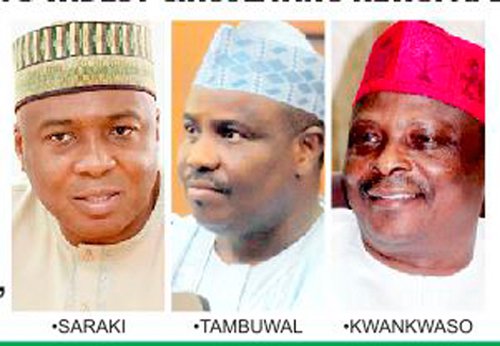 The national leadership of the Peoples Democratic Party (PDP) has
inaugurated a contact committee for the purpose of aligning with other
political parties ahead of the 2019 general elections.

The
committee, which is headed by a former governor of Cross River State,
Mr. Liyel Imoke, will also explore the possibility of tinkering with the
name and insignia of the party.

Some key
stakeholders, particularly prominent chieftains of the PDP that defected
to the All Progressives Congress (APC) in 2014, are said to have
insisted on a change of name, as one of the conditions to rejoin the
party.

Overtures are also being made to woo the Sokoto
State Governor, Aminu Waziri Tambuwal. Tambuwal had defected from the
PDP to the APC at the tail end of his tenure as Speaker of the House of
Representatives.

Investigation by The Nation further revealed
that the high-profile politicians are being wooed with tickets for
choice offices, including the presidential slot.

But the heavy
baggage of corruption trailing the PDP has made it difficult for
prospective defectors to cross over from the APC and other political
parties.

A prominent chieftain of the PDP confided in The Nation
yesterday that the major task of the committee is to make wide
consultations regarding the propriety or otherwise of name change.

The
source, who did not want to be named said, “Yes, we are seriously
concerned about the issue of name change, as being demanded by some of
the intending returnees.

“But I must let you know that not all of
them are insisting on name change because they can see through the veil
of deception in the APC government’s anti-corruption campaign”.

It
was further gathered that the leadership and key stakeholders in the
PDP may have narrowed the search for the party’s presidential flag
bearer to only two individuals -a serving governor and a serving senator
from the same geopolitical zone.

The two politicians are
believed to have enough political clout to challenge President Muhammadu
Buhari’s pre-2015 cult-like followership, particularly among the masses
in the Northwest geopolitical zone.

While inaugurating the
committee yesterday, the National Chairman of the PDP, Prince Uche
Secondus, said the party would do everything within the confines of the
law to regain power in 2019.

Secondus said the past three years
of President Buhari’s administration had convinced Nigerians of the need
for a credible alternative in 2019.

The party chair tasked
members of the committee to reach out to Nigerians and groups on the
need to forge a common front for what he described as the “political
salvation” of the country.

Secondus said: “Just as your name
connotes, you are to deploy your well-versed network to help open the
space and allow into our party, all those whose union with us can help
in rescuing this country.

“Like we always say in this party, this umbrella is big enough to accommodate all people of patriotic ideals”.

Imoke
promised to work tirelessly to deliver on the mandate, stating that the
situation in the country had become too dangerous for well-meaning
Nigerians to fold their hands in resignation.

Others are a former Director-General of
the National Agency for Food and Drug Administration and Control
(NAFDAC), Dr. Paul Orhii; former Aviation Minister, Kema Chikwe; and a
former National Chairman of the PDP, Bello Haliru Mohammed, among
others.

How A Lady Lost A Job Even Before The Interview