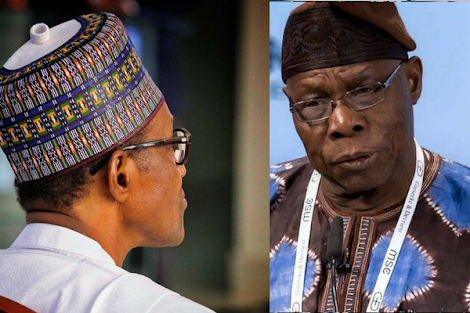 Former President Olusegun Obasanjo on Wednesday declared that even
morons would not describe the mediocre performance of President Buhari
as superlative.

He made the declaration even as he distanced
himself from a purported report trending on the social media that he had
made a U-turn on his verdict of non-performance and had declared
support for President Buhari.

He dissociated himself from the report in a statement by his media aide, Kehinde Akinyemi, in Abeokuta, Ogun State.

Obasanjo
ascribed the social media report to some elements in Buhari’s camp or
his support group that was desperate to secure a second term for their
principal through fair of foul means.

While he described their
action as libellous, Obasanjo lamented that instead of addressing the
fundamental issues of statecraft and economy, they engaged in spreading
falsehoods.

Obasanjo also said he never met any labour leader in Abuja on Workers’ Day, describing any report of such as a fallacy.

The
statement read in part, “It has come to the attention of Chief Olusegun
Obasanjo that some elements in the Muhammadu Buhari camp and or support
group are desperate to secure a second term, fair or foul.

“In
this desperation, everything is fair, including telling libellous lies
against persons and institutions, instead of addressing the fundamental
issues of statecraft and economic management.

“In the last 24
hours the Internet has been bombarded with deliberate falsehoods aimed
at hoodwinking the unsuspecting Nigerians to believe that Obasanjo has
now supported Buhari for his second term, because of some perceived
Buhari’s ‘superlative’ performance in his encounter with Trump during
his visit to the White House in Washington D.C.

“In another
breath, these blackmailers insinuated that Chief Obasanjo met with some
Nigeria Labour Congress leaders in his house in Abuja on Workers’ Day.

“What
a pathetic fallacy! Chief Obasanjo never met any labour man or woman on
May 1, 2018, to make any supposed volte-face to support Buhari.”

The former president said he was neither in Abuja on Tuesday, May 1(Workers’ Day), nor did he own a house in Abuja.

In
the statement, Obasanjo reiterated that he would not endorse failure,
adding that he had not shifted ground on his open letter to Buhari,
which he wrote on January 23, 2018.

In the January letter,
Obasanjo had scored Buhari low on economy and security, accusing him of
running a clannish administration, among others.

The statement further read, “For the record, Obasanjo has not and cannot endorse failure.

“His
position remains as stated in his January 23, 2018 statement on the
state of the nation. Chief Obasanjo sympathises with the plight of the
campaigners and supporters of Buhari.

“He doesn’t believe dishing out fake news that can only be believed by imbeciles will turn black into white.

“Nigerians
know that Chief Obasanjo has only spoken the truth about widening
poverty, alienation and social disunity and near disintegration of the
country through Buhari’s incompetence.

“Obasanjo will continue to
exercise his right to free speech and no amount of hate speech will
assuage Nigerians who are in need of a brand new leadership.

“The
mediocre performance of Buhari cannot be described by anybody as
‘superlative’ even by morons not the least President Obasanjo.”

On the Buhari-Trump meeting, Obasanjo explained that he saw only three points made by President Donald Trump.

He
said, “From the Buhari/Trump meeting, Chief Obasanjo only saw through
three points: One, the US will continue to reduce purchase of crude oil
from Nigeria and there is nothing Nigeria under Buhari can do about it.

“Two,
the US will export agricultural products to Nigeria and Buhari’s
government will encourage that; and three, all the killings taking place
in Nigeria by herdsmen are being done by expatriates trained by Gadaffi
and no Nigerian is to blame and Buhari cannot do anything to stop it.

“For whatever the meeting was worth, President Buhari again bungled another opportunity to self-redeem.

“No
wonder President Trump ordered him in a rather condescending manner to
go back home and stop the killings going on in Nigeria!

“We hope now that Buhari will heed Trump’s advice, which hopefully will be considered non-abusive.

“Therefore, Chief Obasanjo is more convinced in his statement of January 23 and will not change his position…”