Father Of Man Murdered Over N7M Naijabet Winnings Cries Out 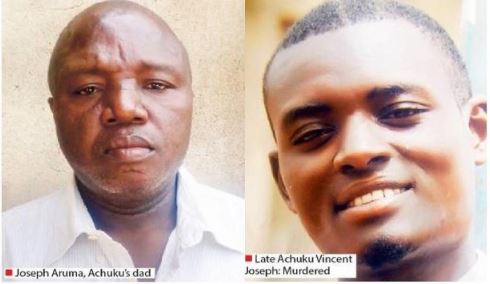 The father of the deceased, Aruma,
said: “On Tuesday, around 5am, my son came into my room and told me
that thieves were in our house in the night and they entered his room to
steal his plasma TV and a NaijaBet ticket slip with which he won N7.4m.

“Later,
some of his friends came into the house, shouting that they would not
agree because the NaijaBet agent knows about those who stole the winning
ticket. Later in the day, my son started screaming, complaining of
severe headache.

“After a while, he started behaving abnormally,
saying they wanted to kill him. His condition later worsened as he
could no longer talk. We took him to the hospital and he was admitted.
Moments later, his friends showed up again.

“They revealed that
he had been given a charm and that they had warned him not to stay
without the charm. A pastor was invited to pray for him after we
discovered the charm in his pocket.

“My sister insisted we keep
him away from his friends by relocating him from the place since we were
not sure where his problem was from. They still used diabolic means to
trace him which worsened his condition.”

He noted that Achuku
went out as early as 5am on the day he was killed without the knowledge
of anyone and he suspects that he was lured out of the house through
some kind of spiritual means, only for the family to find him dead
later.

Aruma said, “I suspect both his friends and the NaijaBet
agent for this ungodly act. My appeal to security agents is to
investigate and unveil those responsible for the killing.”

Daily
Trust reports that the Nasarawa State Command’s PRO, Idrisu Kennedy,
revealed that the command has arrested some people in connection with
the killing, adding that the matter is being investigated