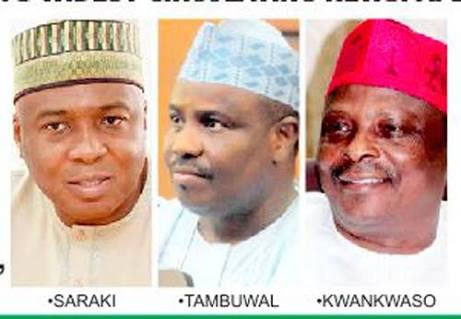 Strategists in the camp of President Muhammadu Buhari are awaiting the
next line of action from leaders of the defunct New Peoples Democratic
Party (nPDP), following an ultimatum the latter issued to the leadership
of the All Progressives Congress (APC) for a meeting.

Their action is about to change the 2019 politics.


In a four-page letter the defunct nPDP leaders
addressed to the National Chairman of the APC, Chief John Odigie-Oyegun,
dated April 27, 2018, they alleged that their members had been
relegated to the background in the APC in spite of their contributions
to the success of the party.

But despite the seven-day ultimatum,
the National Chairman of the All Progressives Congress (APC), Chief
Odigie-Oyegun and members of the National Working Committee (NWC) are
yet to meet on the protest letter.

There were indications that
the party leadership was tactically awaiting the return of President
Muhammadu Buhari, the leader of the party, before taking a decision.

But
some Buhari’s strategists who spoke with The Nation last night said
they were not “losing sleep” over the ultimatum, adding that it was
anticipated and they had guarded against it.

They are only awaiting the next step of the nPDP leaders after the expiration of the seven-day ultimatum for counter-response.

Investigation
conducted by The Nation revealed that the party is overwhelmed with
activities, including the governorship primary in Ekiti State, the
conduct of local government congresses, state congresses and the
forthcoming national convention.

It was learnt that managing the
aftermath of the Ward Congresses in some states had been herculean for
the party which is trying to ensure peace and reconciliation among its
members.

A member of the NWC said the leadership of the party might not discuss and respond to the nPDP letter in isolation.

“Apart
from being busy, the issues raised in the letter are weighty and all
other organs might have to be involved,” the source said.

Another
party source, however, said: “The party appears to be tactically
awaiting the return of the President because most of the issues raised
border on the disposition of the Presidency.

“You cannot get a
letter and go to town with a response without hearing from the other
side. With feedback from the President, the party will be in a good
stead to lay the cards on the table.

“Even on the eve of the
President’s departure to the United Kingdom, he had audience with some
of the key leaders of nPDP who joined hands to form the APC coalition.

“No one knew whether or not the April 27 letter came up for discussion.”

When
contacted, the National Publicity Secretary of APC, Mr. Bolaji
Abdullahi, simply said: “The party has not had the opportunity to
discuss the letter.”

A source in Buhari’s camp, who spoke in
confidence, said: “We are not losing sleep over the ultimatum, because
we know their ultimate target is exit from APC. We had anticipated it
long time ago and we have our plans on how to curtail them.

“The letter was just the first stage of a pre-planned agenda to embarrass APC and President Buhari.

“They have lined up more activities before they finally defect. We got all the intelligence report long before hand.

“On
the alleged side-lining of the nPDP members, we will respond with
appropriate statistics at the right time. The letter was misleading and
inaccurate.”

Responding to a question, the source added: “Unlike
in 2014, the political dynamics are different this time around because
Buhari is a covert strategist.”

A leader of the nPDP said: “We
cannot talk of the next step now until Buhari comes back to the country.
We want his reaction to our notes too.

“His body language will determine our next move, which is being jealously kept.”

Father Of Man Murdered Over N7M Naijabet Winnings Cries Out