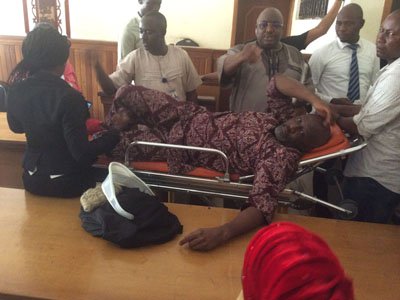 Embattled Senator Dino Melaye (Kogi West) was yesterday arraigned before
a Magistrate’s Court in Wuse Zone 2, Abuja, for allegedly jumping out
of a police vehicle.

He was accused, in a First Information
Report (FIR), of destroying the side glass of a police vehicle and
attempting to kill himself.

He was also said to have resisted arrest.

The
FIR reads: “On the 24th of April 2018, about 1330hrs at Area One
roundabout Abuja, within the jurisdiction of the court, you Senator Dino
Melaye of the Federal Republic of Nigeria while being conveyed in a
Police White Hilux Bus with Registration number NPF 3354 D to Lokoja,
Kogi State, to be arraigned in court for conspiracy and unlawful
possession of prohibited firearms in charge Number CMCL/14SC/2018 filed
at the Chief Magistrate Court Lokoja, you Senator Dino Melaye
intentionally broke the side windscreen of the bus and jumped out of the
bus after it was blocked by a Hilux Vehicle with registration number
Kaduna MKA 603 GY occupied by your younger brother Samuel Melaye and one
Barrister Amefula David Emeka and driven by yet to be identified person
who escaped from the scene after the blockade.

“You Senator Dino
Melaye after breaking the side windscreen attempted to kill yourself by
jumping out of the bus and fell on the ground and thereafter started
shouting that you want to kill yourself and implicate the police for
your death.

“That police officers, who were escorting you in the
bus tried to re-arrest you back to the bus, but you resisted further
arrest with the help of your brother Samuel Melaye and some lawyers in
your company and further threatened to injure the police officers if
they try to further arrest you and you finally escaped from the scene in
another Hilux vehicle.”

Dressed
in a native attire, Melayewas brought to court in a police ambulance.
The ambulance was marked: NPF2214D. He laid on the stretcher throughout
the about one hour proceedings.

He was brought to court under
heavy security. Entry and exit into the court premises was restrained by
the heavily armed riot policemen, numbering about 200.

Okoro argued that since his client was not charged with capital offence, he was entitled to bail.

Iziyon objected to the bail application and urged the court to reject it.

Mrs. Segun-Bello proceeded to grant Melaye bail at N90 million with two sureties in like sum.

The
magistrate said one of the sureties must be a civil servant not lower
than Great Level 14, and that the other must have easily identifiable
residence in Abuja.

Mrs. Segun-Bello ordered that Melaye must deposit his international passport with the FCT Police Command.

She ordered the defendant to report at the Wuse police command every working day of the week until same is altered by the court.

The Nation reports that the magistrate adjourned to June 6.

After
the court’s proceedings, Melaye and his supporters remained in the
courtroom for some hours, while his lawyer and others made frantic
efforts to meet the bail condition.

Notable faces at the court
with Melaye were Senators Ben Bruce (PDP, Bayelsa) and Abiodun Olujimi
(PDP, Ekiti). The entrance to the courtroom was secured by about 10 riot
policemen armed with AK47 rifles.

At about 4:20pm, Melaye was moved out of the courtroom, accompanied by the armed policemen, into the waiting ambulance.

The vehicle was immediately driven away by a policeman, followed by a long convoy of police vehicles, with siren blaring.