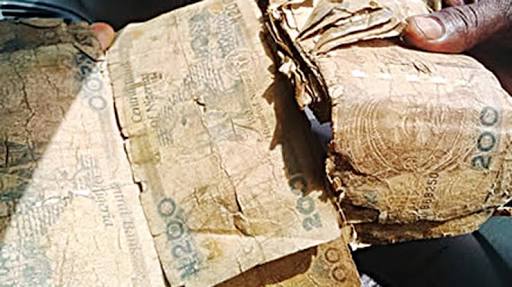 The Central Bank of Nigeria (CBN) says customers should demand new naira
notes from their respective banks and reject dirty ones.

Speaking
in an interview with NAN in Lagos on Thursday, Isaac Okorafor, CBN
spokesman, said commercial banks are sabotaging its effort in replacing
mutilated notes with new ones.

The bank made similar claims in February.

Okorafor
said the apex bank is aware of the development and has taken several
measures in addressing the issue of mutilated notes in the circulation.

According
to him, one of the steps taken to mop up the mutilated notes from the
system was reduction in the amount CBN charges banks for sorting the
dirty notes for clean ones from N12,000 to N1,000 per box.

Okorafor
said the reduction in charges for the commercial banks which lasted for
three months from January 2 to March 28 was to encourage them to bring
back more dirty notes.

He said the charges were raised to N2,000 per box after the March 28 deadline.

He
said the bank has adopted another option of withdrawing the unfit notes
from circulations rather than depending on the commercial banks.

The
bank is now engaging various market associations to encourage traders
change genuine dirty notes for new ones at no cost to the trader.

“The bank has already taken the new measure to Kano, Kaduna and Abuja and also intends to bring it to the south,” he said.

He appealed to Nigerians to handle the national currency with care as it was a symbol of identity and value.

Finding Joy As A Child Of God Through Hardship