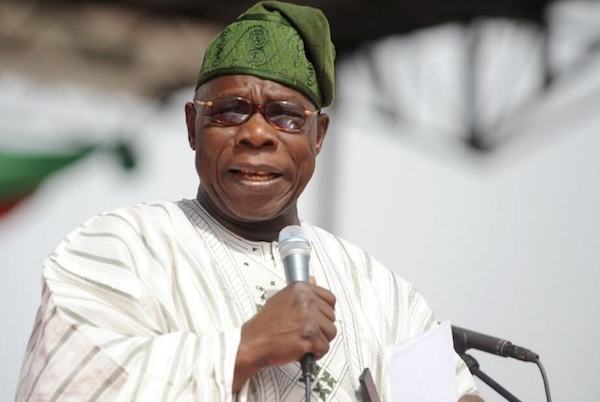 Former President Olusegun Obasanjo says the ruling All Progressives
Congress (APC) is taking Nigerians for fools while “revelling in an
unrepentant misgoverning of Nigeria.”

This is
coming as the promoter of the Coalition for Nigeria Movement also
disclosed that the movement had adopted the African Democratic Congress
as a political platform to actualise its dream for a new Nigeria.

Obasanjo said this on Thursday evening while briefing journalists at his presidential library home in Abeokuta.

While lashing out at the ruling party, Obasanjo
said most Nigerians today were poorer than when the APC came in, adding
that the country had been further impoverished with foreign loan
jumping from $3.6bn to over $18bn.

He said, “The APC, as a
political party, is still gloating and revelling in its unrepentant
misgovernance of Nigeria and taking Nigerians for fools.

“There
is neither remorse nor appreciation of what they are doing wrong. It is
all arrant arrogance and insult upon injury for Nigerians.

“Whatever
the leadership may personally claim, most Nigerians know that they are
poorer today than when the APC came in and Nigeria is more impoverished
with our foreign loan jumping from $3.6bn to over $18bn to be paid by
the present and future generations of Nigerians.

“The country is
more divided than ever before because the leadership is playing the
ethnic and religious game which is very unfortunate.”

He added, “And the country is more insecure and unsafe for everybody. It is a political party with two classes of membership.”

Obasanjo
said since the movement adopted the African Democratic Congress (ADC),
he had completed the first phase of his assignment.

In the speech
he titled, ‘My treatise for future of democracy and development in
Nigeria’, the former President said, “Let me start by welcoming and
commending the emergence of a renewed and reinvigorated African
Democratic Congress, as a political party.

“Since the inception
of the Coalition for Nigeria Movement, many of the 68 registered
political parties have contacted and consulted with the movement on
coming together and working together.

“The leadership of the
movement, after detailed examination, wide consultation and bearing in
mind the orientation, policies and direction of the movement, had agreed
to adopt ADC as its platform to work with others for bringing about
desirable change in the Nigeria polity and governance.”

He,
however, said the emergence of ADC was the beginning of hard work to
continue to consolidate the nation’s democracy and ‘to make development
in all its ramifications real, relevant, accessible, popular and
reaching out to all Nigerians wherever they may be.”

While he
thanked Nigerians who hearkened to his scathing open letter to President
Muhammadu Buhari, dated January 23, “which catalogued the incompetence,
nepotism, a lack of performance, among others, of the administration,”
he noted that their concerted efforts had made the adoption of ADC
possible.

He said the ADC would accommodate youths, women and others and would sanitise the system.

Obasanjo
said he would not advise anyone to join the PDP or the APC, “no matter
what window-dressing reformation they may claim.”

He said the PDP
offered an apology without disciplining those who set Nigeria on a
course of ruin and some of them are still holding leadership roles in
the party.

He said, “Nigerians may forgive, but Nigerians should
never forget; otherwise they will be suffering from amnesia and the same
ugliness may raise its head again.”

Meanwhile, a former Governor
of Osun State, Prince Olagunsoye Oyinlola, has described Nigeria as a
killing field under the leadership of Buhari.

Oyinlola, who is
the National Coordinator of the CNM, said this at the formal merger of
the movement with the African Democratic Congress in Abuja on Thursday.

The press conference was held moments after Oyinlola resigned as the Chairman of the National Identity Management Commission.

The
former governor said, “Now, the situation we have found ourselves calls
for the need to invent another means of directing the political
structure of the country. I am sure that you will admit that this is not
the kind of change that we wanted when we voted in 2015 if you are to
be sincere with yourself.

“We are not at war but everywhere you
go, the country has been turned into a killing field. We cannot just sit
down and fold our arms. If it means like-minded people will need to
ensure that things are run properly, we will do that.”