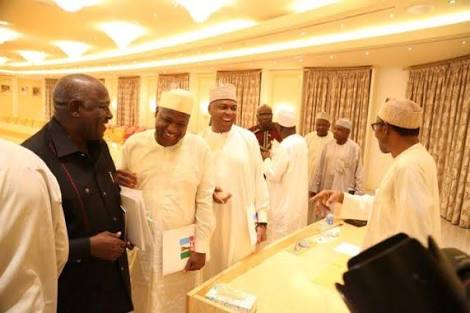 The leadership of the new Peoples Democratic Party in the ruling All
Progressives Congress will today (Monday) meet with President Muhammadu
Buhari.

The leader of the nPDP, Alhaji Kawu Baraje, who disclosed
this in an interview with journalists in Ilorin on Sunday, said the
meeting with Buhari would take place after the dialogue with
Vice-President Yemi Osinbajo.

He stated that
he was hopeful that at the end of meetings with VP Osinbajo and
President Buhari, the APC would come out stronger and become more united
in the general interest of the citizenry.

According to him, the next line of action of his group will be determined by the outcome of the meetings.

Baraje
stated, “After meeting with the Vice-President, the attendees at the
meeting are expected to meet with President Muhammadu Buhari later in
the day to intimate him about the outcome of their meeting.

“I am
optimistic that at the end of the meeting with the Vice-President,
and later with President Muhammadu Buhari, our party, the APC, will
come out stronger and become more united in the general interest of the
citizenry.

The nPDP had, in a letter, given the APC leadership a
one-week ultimatum to address its grievances, which, it stated, included
marginalisation.

The group was reported on Sunday to have listed
fresh grievances including complaints about the conduct of the recent
states’ congresses of the APC and the alleged refusal of the party
leadership to stamp its feet on parallel congresses in some states.

PDP woos aggrieved APC members
Meanwhile,
according to Punch, the opposition PDP has started moves to take
advantage of the crises rocking the APC, and win over some members.

Buhari Speaks From Both Sides Of His Mouth – Obasanjo