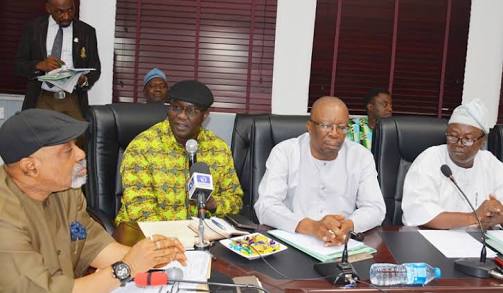 The Organised Labour has presented fresh demand for the new National
Minimum Wage for workers to the tripartite committee, using current
economic indices as its yardstick.

Labour said the N56,000 earlier presented was no longer feasible.

Nigeria Labour Congress (NLC) General Secretary Dr. Peter Ozo-Eson, who
spoke in an interview in Abuja, said the earlier demand by labour, which
was presented two years ago, has been overtaken by the present economic
realities.

The NLC scribe said that the fresh demand was submitted at the last
meeting of the tripartite committee after an agreement among Labour
leaders.

He said: “We have taken a position when we made the initial demand on
the government, which is almost two years back. But then when we got to
the tripartite committee and the committee called on all stakeholders
involved to submit a memorandum.

“In responding to the request for a memorandum, we then use current
economic indices to make a fresh demand. So, what we place and what we
demand is an outcome of analysis we carried out.

“We did the analysis using the current economic table and data of the
nation and of cause that came to something different. We are going to
maintain what is in the memorandum that we have submitted to the
tripartite committee and it is not something or a figure we will be
discussing in public.”

He said the fresh demand was contained in a joint memorandum by the NLC
and the Trade Union Congress (TUC), saying: “We have also formerly made
the presentation to the committee and we have defended it and we have a
different submission from the initial one. We have also taken account of
changes between the first demand and the current position.”

Nigeria Has Lost As Much As $200Billion To PIB?

Wrong Ways Some Are Planning Their Getaway