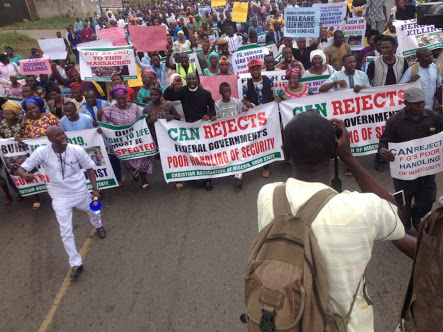 It was a day of prayers and protests yesterday over the endless killings
of innocent Nigerians in some parts of the country by rampaging
herdsmen.

Christian Association of Nigeria (CAN) President, Supo
Ayokunle, called for the protests as a wake-up call to the Federal
Government that the bloodletting must stop.

However,
there were no protests in the Southeast. The protests in Lagos, Ibadan,
Ado-Ekiti, Akure, Kaduna, Port Harcourt, Makurdi, among others, were
largely restricted to the Baptist Church. Rev Ayokunle is of the
Nigerian Baptist Convention.

According to The Nation, Pentecostal
churches, which are mostly affiliated to the Pentocostal Fellowship of
Nigeria (PFN), did not join the protest.

In Kano, the state chapter of CAN chose prayers instead of a protest.

It
declared that the killings were the handiwork of mercenaries and urged
the Federal Government to treat the killers as terrorists.

State
CAN Chairman Rev. Adeolu Samuel Adeyemo said the prayer was to seek
divine intervention to end the killings of innocent Nigerians “after due
consultation”

He said: “The alleged herdsmen killers are
mercenaries. We demand the Federal Government to declare and treat them
as terrorists.

“The military should confront them as thus to stop
the dastardly act of theirs and, as well, demand that Federal
Government should look out for their sponsors and bring them to
justice.”

The association praised Governor Umar Ganduje and the Emir of Kano, Muhammad Sanusi II, for the peace among residents.

Rev.
Adeyemo said CAN in Kano decided not to protest the killings so as not
to give hoodlums the opportunity to hijack it, adding that through
prayers, “God in His infinite mercy will intervene and restore peace in
those trouble areas”.

“We demand the need to go the extra mile to
free the Chibok girls, Leah Sharibu and all those abducted by the
terrorists irrespective of tribe and religion,” he said.

Christian
leaders in Kano gathered at Believers Baptist Church, 6, Zungeru Road
where they prayed to God to save Nigerians from killers.

Rev.
Ayokunle led the protest in Ibadan where church members converged on the
Oritamefa Baptist Church in the Oyo State capital. The protest was
restricted to the church premises.

Youth groups and women
estimated to be about 2,000, walked round the church premises and
vicinity. They called on the government to stem the killings.

The
service in the church was also to offer thanksgiving for the success of
the just- concluded Annual Baptist Convention, which held in Port
Harcourt, the Rivers State capital.

Inscriptions on some of the
placards read, “CAN says No to Violent Killings”; “FG, stop this wicked
act”; “CAN says No to Religious Killings”; “FG, release Leah Sharibu
from Captivity”; “Enough of Bloodshed in Nigeria, CAN rejects FGN poor
handling of insecurity”; “Human beings are more valuable than cattle,
protect human beings”; “FG be sensitive to families that are mourning”;
“No more excuses for mass murder”; and “Enough of unlawful killings in
the country”, among others.

There was also a protest at the
Gospel Faith Mission International International (GOFAMINT) Church,
Akanran Road in the Ona Ara Local Government Area.

The protesters sang and condemned the killings.

In
Lagos, protests were held at the Shepherded Hill Baptist Church,
Obanikoro where congregants protested at the Obanikoro Bus Stop,
chanting “no more bloodshed”. They carried placards, with inscriptions
such as, “CAN rejects poor handling of insecurity”, “Arrest and
prosecute wicked killers in Nigeria”, “Federal Government of Nigeria,
take full responsibility for security in Nigeria”, “Enough of bloodshed
in Nigeria” and “Federal Government ensure immediate release of Leah
Sharibu from captivity”.

Senior Pastor Israel Kristilere said the
protest was to make Nigerians realise that the church was no longer
find the killings palatable.

“We want the whole world to know that we are against bloodshed in this country and we are not part of them.”

He said the government must stand up and ensure security of Nigerians.

“Government
must be responsive and responsible. It is their responsibility to
ensure the security of lives and properties and whatever it takes to do
this can never be too much. If there is need for more gadgets, they
should get it,” Kristilere said.

He noted that many of those
troubling the country were no ghosts, adding that if the government
spends billions of dollars to tackle insecurity, it is not too much.

“We are also demanding the release of Leah Sharibu from the custody of Boko Haram,” he said.

Kristilere urged the government to be serious with insecurity.

He prayed for the exposure of all those sponsoring bloodshed, adding that God will destroy all the plans of the wicked ones.

In
Ekiti, the protesters took to the streets from about 2.00 pm. Policemen
and Nigeria Security and Civil Defence Corps (NSCDC) members watching
over them.

This was aside the protest in the early hours by
various individual churches, such as Gospel Faith Mission International
(GOFAMINT) and the Baptist Church among others.

Led by the CAN
Chairman Rev. Joshua Orikogbe, the protesting Christians marched from
the CAN House at Ori Apata on Adebayo Road in Ado-Ekiti to the Adekunle
Fajuyi Memorial Park. They ended the protest at the Government House
where they sent a letter to President Buhari through Governor Ayo
Fayose.

The CAN chairman said: “We are for peace in Nigeria but
it is like we are being pushed to the wall by these wanton killings of
Christians and clerics.

“To us in Ekiti CAN, the only way to
sustain peace is for the government of the day at the federal level to
abandon politics for sometime and focus the needed attention on security
and safety of lives,” he said.

Fayose, whose Special Adviser on
Religious Matters, Pastor Seyi Olusola, received the protesters, praised
them for being peaceful.

The Ekiti State Baptist Conference President Rev. Yinka Aribasoye has called on the Federal Government to stop the killings.

He called for the resignation of the Service Chiefs if they could not guarantee the security of ordinary Nigerians.

A correspondent of NAN, who
went round some churches in Makurdi, reports that most worshippers,
regardless of denomination, wore black and white dresses.

NAN
also reports that the worshippers held peaceful protests within their
churches to denounce “the acts of barbarism” on innocent citizens.

They
held placards with inscriptions such as “Enough of the killings”, “We
want peace in our state”, “No more bloodshed”, “Lord, what have we done
to deserve this?’’ among others.

At the NKST church in Iyortyer, Makurdi, the worshippers carried placards, marching peacefully within the premises.

“We are saddened by these killings and we want the world to know our displeasure over these acts,’’ he said.

Ikyaan
said that the dress code was reminiscent of the tradition of the
church in wearing sack clothes when faced with such calamities.

“In
the olden days, Christians wore sack clothes when confronted with
calamities of monstrous nature but since we no longer have such clothes,
we wear black and white to show our grief and anguish.

“Our
concern is to express our displeasure and feelings to the immediate
society, our leaders in Nigeria and President Buhari, without mincing
words that we are offended by the ongoing killings in the state and the
country,’’ he said.

He said that with the killing of the
priests and worshippers, it was very clear that the invaders were not
after the green vegetation but the soul of the state.

The cleric
said that the killing of the priests had further deepened their faith,
adding that no amount of intimidation would stop them from practicing
their faith.

He said that the priests and faithful killed had
become martyrs of the herdsmen invasion in Benue, adding that they were
the seeds sown by the church.

Security operatives were patrolling the state capital while the church services were ongoing.

Members of the First Baptist Church in Rivers State staged a peaceful protest within the church’s headquarters.

A
church leader, who declined to be named, said: “It is unfortunate that
President Muhammadu Buhari has not said much since the advent of the
herdsmen killing of Christians in Southern Kaduna, parts of the
Northeast and recently Benue State.

“We are demanding the
immediate release of Leah. They want to turn this into a religious war.
If the Federal Government does not act now and end this madness,
Christians will rise up and defend themselves and Nigeria will be worse
than Afghanistan, Mali and Rwanda,” he said.